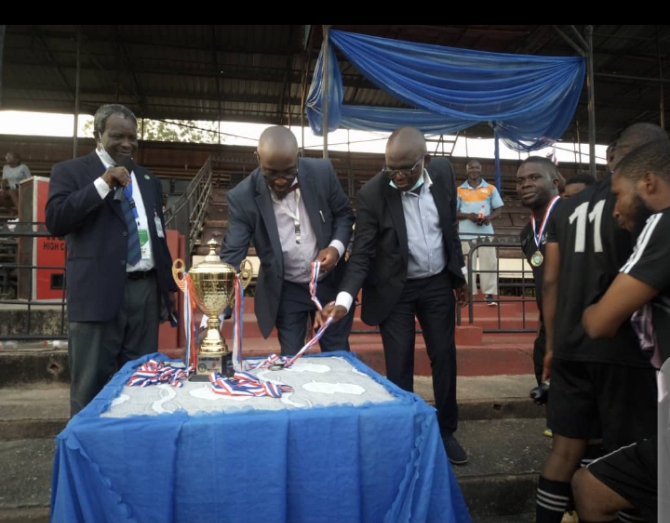 History was made yesterday as
Adebayo & Gbadamosi law firms lifted the coveted trophy of the Aare Afe Babalola / Ibadan Bar League after thrashing the hard fighting Abike ‘boys’ 2 – 1 in the final of the football match .
The Abike team , who appeared to be a better side , got the bronze medals and cash prize of N150,000 as runners up.
Before the final match, Crown Solicitors defeated Bandele Aiku with 4 -2 in the third match played at the Olubadan Stadium, Iyaganku, Ibadan, carting away medals and a cash reward of N100,000 .
Twelve  teams from different law firms in Ibadan , Oyo state  participated  in this year’s Aare Afe Babalola ,SAN / Ibadan Bar Football League , which commenced on Friday November, 13, 2020  at the Olubadan stadium.
The football league was solely sponsored by the Afe Babalola & Co ; comprising the four branches ( Ibadan, Lagos , Abuja , and Port-Harcourt ) to celebrate and honor the founder/Principal , Aare Afe Babalola for his untiring contributions  to legal practice and to Nigeria at large.
Speaking with newsmen after the final match, Mr Sina Ogungbade , a Principal of Aare Afe Babalola & Co , also expressed happiness over the outcome of the tournament , stating that as lawyers ,there is need for them to make time out to mingle among themselves to foster unity and togetherness among legal practitioners in the state .
also see:

” This is our way of fostering unity  development , and togetherness amongst lawyers . It is not all about going to courts alone, lawyers should have time to mingle among themselves , to meet and interact . And we chose football because the Principal of the firm, Aare Afe Babalola & Co is an avid supporter of football . As a matter of fact , at the age of 91, 92 , he still has a club that he supports weekly “, he stated.
He  said ” we have chosen to use football as a mark of honour for our founder/ Principal because of his love and passion for football , our founder/Principal always finds time to watch good football despite his very busy working schedule”.
Besides, he said the competition has increase the bonding and deepen the friendship amongst lawyers in the premier bar .
In his remarks , Mr Olayinka Esan , the current Chairman ,Nigeria Bar Association (NBA), Ibadan branch ,  listed some of the benefits of the annual football competition to include celebration of the patron of the Bar , Aare Afe Babalola SAN and  promotion of unity among lawyers.
Esan said ” Well, the first thing is that we celebrate our patron, Aare Afe Babalola SAN who donated this cup and its a yearly tournament . This is the second edition . All work and no play, makes Jack a dull boy .  As you see, some of us have crossed the border, but the young lawyers you have here have made us proud. Its a competition that we started about two months, and today its the final.  Apart from the competition, apart from relaxing, we are getting together. Everybody is happy. It is just going beyond playing , it is a competition and we are getting rewards, all thanks to Aare Afe Babalola SAN “.
Also, the former Attorney General and Commissioner for Justice in Oyo state, Asiwaju Bayo Ojo , a Principal Partner, Adebayo & Gbadamosi law firm, expressed gratitude to the organiser of the competition , Aare Afe Babalola for the wonderful opportunity to be part of the tournament.
” I am happy and  highly elated.  And I must thank the sponsor of this tournament,  our father, leader and grandfather in law, Aare Afe Babalola , a Senior Advocate of Nigeria ( SAN). You see , as lawyers we hardly have time to recreate, but our father , Aare Afe Babalola had opened a great window for us to play this tournament. Apart from promoting healthy relationship among law firms in Ibadan, it goes beyond that , promotes a healthy way of living which is very good. We are really very happy for this and we hope that by next year, we will witness another robust tournament than this, ” he said.