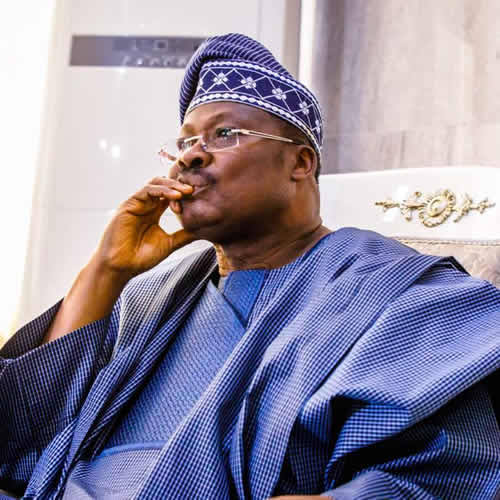 Deputy National Chairman (South) of the All Progressives Congress (APC), Senator Abiola Ajimobi has expressed sadness over the death of third Republic Governor of old Ondo State, Evangelist Bamidele Olomilua.
According to a statement by Bolaji Tunji, Special Adviser, Communication and Strategy to the APC Deputy National Chairman, Evangelist Olumilua lived a life of service to the people he served diligently till he breathed his last on Thursday, June 4, 2020.
The immediate past Governor of Oyo State described the late Evangelist Olumilua as an elder statesman, who though had a short tenure as Governor due to military intervention, left indelible imprints in the sands of time.
“As a progressive – minded elder, he was one of the founding members of the Action Congress of Nigeria (ACN) in 2006, which later metamorphosed into our great party, the All Progressives Congress (APC).
“By his death, a vacuum has been created in the progressives’ fold while the people of Ekiti have also lost an illustrious and distinguished Son. Our dear Country has equally lost the sage counsel of this elder statesman”, Ajimobi said.
Ajimobi described Olumilua as an upright man who was ever ready to speak to his conviction. “He was a man of impeccable character who never minced his words. As the Chancellor of the Ekiti State University, his contributions to that Institution are legacies that would continue to live after him”.
The APC Deputy National Chairman also sent condolences to the governors of Ekiti and Ondo States, Dr Kayode Fayemi and Arakunrin Rotimi Akeredolu over the loss, including the family of the deceased politician.
“My heartfelt condolences goes to the governors of Ekiti and Ondo States and Mama, his wife, for the loss of her loving companion of several decades, his Children who have continued to distinguish themselves and the loved ones left behind his exit”.