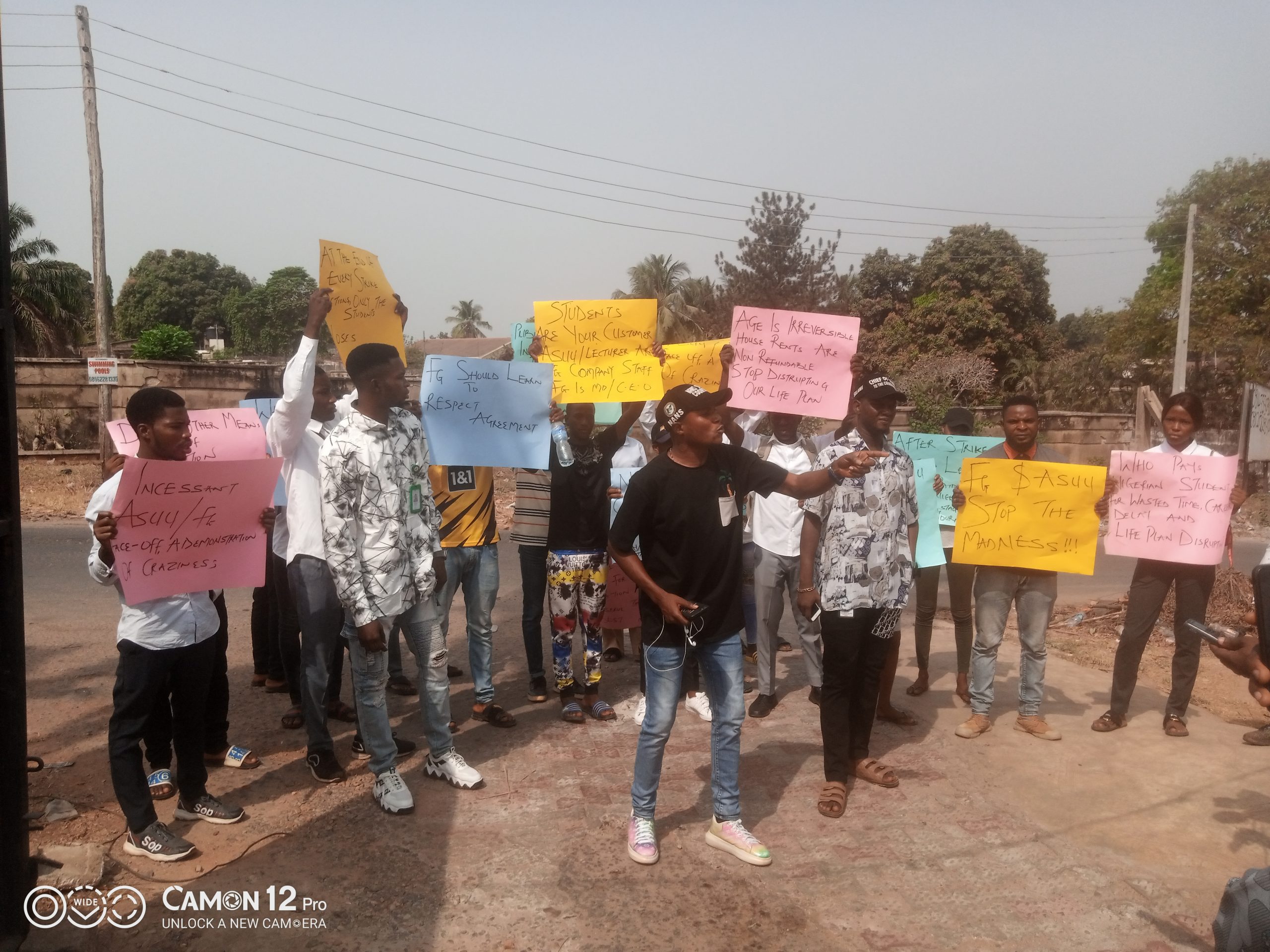 The B zone of the National Association of Nigerian Students (NANS) on Monday advised the federal government and the Academic Staff Union of University (ASUU) to resolve their crisis over the ongoing strike of the union for the sake of the students.
NANS said ASUU should consider that they rig elections for politicians, hence needs not to go for strike.
Speaking at a protest at the Iyaganku press center of the Nigeria Union of Journalists (NUJ),  the Southwest Coordinator of NANS, Tegbe Steven Fiyinfoluwa vowed to block all the federal roads on Tuesday, if the federal government and ASUU failed to reach agreement.
Inscriptions on the pacards displayed during the protest reads ; “FG and ASUU, Stop the madness. Stop the strike and revertalise our education, After the end of strike, only students lose. FG should learn to respect agreement. Age is irriversible, house rents are not refundable stop distrupting our life plans.
Speaking further, the state coordinator said; “We are holding our peaceful demonstrating here today because of the lingering crisis between the ASUU and federal government which has been a reoccurring event over the years. Unfortunately, we students are always been at the receiving end. If the federal government and ASUU refused to resolve today, we won’t hesitate to go by the way of violence. It is going to be a violence for violence and war for war. They cannot continue to be wasting our time. When two elevants fight, it is the grass that suffers.
“We are calling on the federal government to learn how to respect agreement. We have seen in many occasions when the federal government and ASUU reached agreement but the federal government failed to fulfil the pledge. We are also calling on ASUU to have a decisive ways of spending their resources, even when their demands are  met.
“This is because we want to see the projects they are doing with the subvention they are receiving from the federal government. Our people are complaining that they don’t use to see what they are doing with the money release to them. Meanwhile, it is the same members of ASUU that rig elections for politicians. Though we don’t have any issue with them because they are our fathers and teachers but we need to say the truth.
also see:

“Again, ASUU members should have a decisive ways to deal with issues rather than going on strike all the time because they are wasting our time. We are appealing to the federal government and ASUU to resolve the issue and allow us to go back to our various classes.
“All the attempt to send us back to the street will be resisted. The protest is holding across the country today. If the Federal government refused to settle today, we shall continue to return to street for protest until our demands are met. The instruction from the national office of NANS is that all the federal roads should be blocked but as a coordinator, i have to consider many factors including security implications before given such instruction to block all the roads.
“If peradventure ASUU and federal government refused to make up today, we will block all the federal roads tomorrow.”