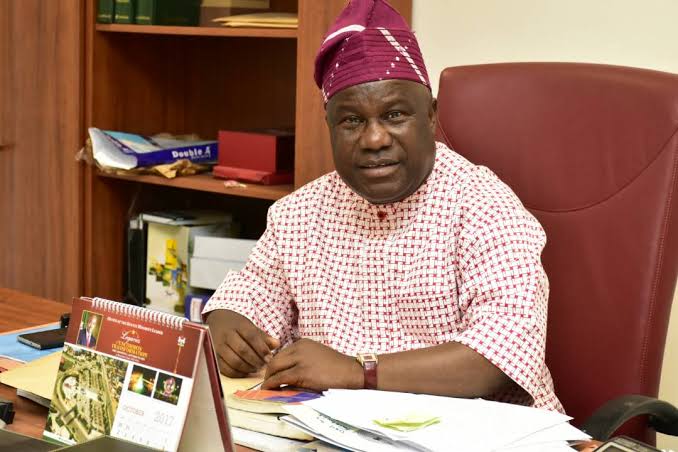 An Iseyin-based union, Iseyin Development Union (IDU) on Sunday described a political group, Ebedi Frontliners as ignorant and mischievous for attacking the person of the senator representing Oyo North senatorial district, Senator Fatai Buhari.
Ebedi had recently said Senator Buhari lied on his efforts in constructing Oyo-Iseyin road as a rare display of ignorance and mischiefs.
But Iseyin Development Union (IDU) on Sunday said it is quite unfortunate that Alhaji Segun Fasasi, the leader of Ebedi and his members cannot separate the role of a lawmaker from that of executives.
The group noted that those behind the unfounded information are cowards  who have never contributed to the development of Iseyin and Oke Ogun at large.
IDU in a statement by its National Publicity Secretary, Comrade Layo Kehinde, said it is on record that Senator Buhari has taken steps by visiting the Honourable Minister of Works and Transportation,  Babatunde Fashola  who has promised to fix the road.
The group further said part of Buhari’s effort to make Oke-ogun roads motorable is the ongoing construction of Okeho-Iseyin-Igbeti-Ilorin roads facilitated by Buhari.
He said the lawmaker should not mind the insults from the group but intensify efforts in ensuring that the roads are fixed.
Comrade Kehinde stressed that Iseyin Community appreciated the efforts being put in place by Senator Buhari, adding that Iseyin and entire Oke Ogun has never and will never regret given the lawmaker their mandates for the second time.
In a related development, the youths in Iseyin under the umbrella of Iseyin Youth Forum has warned Ebedi Frontliners, Iseyin never to use their names in bringing the Godfearing and outstanding lawmaker down.
also see:

The group who expressed this in a release issued this afternoon, signed by its Chairman, Alhaji Ali Nureni said Iseyin youths commended efforts of Distinguished Senator Abdulfatai on Iseyin/Oyo Road.
“We were aware that it is not within the purview of the lawmakers to award contract but that of executive, we are only appealing to our Senator not to relent in his efforts to get the road fixed”, Comrade Nureni said.
He added that Senator Abdulfatai Buhari has never lied to Iseyin, Oke Ogun and Oyo North constituents in general and that was why he was entrusted with the office for the second time.
” He was with us during the electioneering campaign and he promised to do his best in calling the attention of the government to the road which he has started. He didn’t tell us that he is going to do the road when he is not even the executive”, the group disclosed.
The group warned Ebedi Frontliners never to portray Iseyin youths as hooligans to leaders in Nigeria as the Chairman said they were all aware of the letters written first by Senator Abdulfatai and later Honourable Shina Peller before their meetings with the Minister, Babatunde Raji Fashola.
Iseyin youths Forum stressed that they were enjoying the representation of Senator Abdulfatai because he has helped many of them against poverty by empowering them.
The group commended the efforts of the lawmaker on Iseyin/Okeho Road  ongoing project, provision of ICT centers in our schools and efforts that resulted to the retain of Oyo North Collation Center in Iseyin.
“This man deserves commendation not condemnation,” Iseyin youths hinted.
They charged Ebedi Frontliners to stop pursuing personal interest thinking that youths in Iseyin will support them but join other forces to genuinely work for the progress of the city without prejudice.
“We appeal to Senator Buhari to please see the embarrassment from Ebedi Frontliners as a political game by  selfish figures,” Comrade Nureni emphasised stressing that they are never the spokespersons for Iseyin.