Olubadan Has No Power To Install Babaloja For Us, Group Kicks 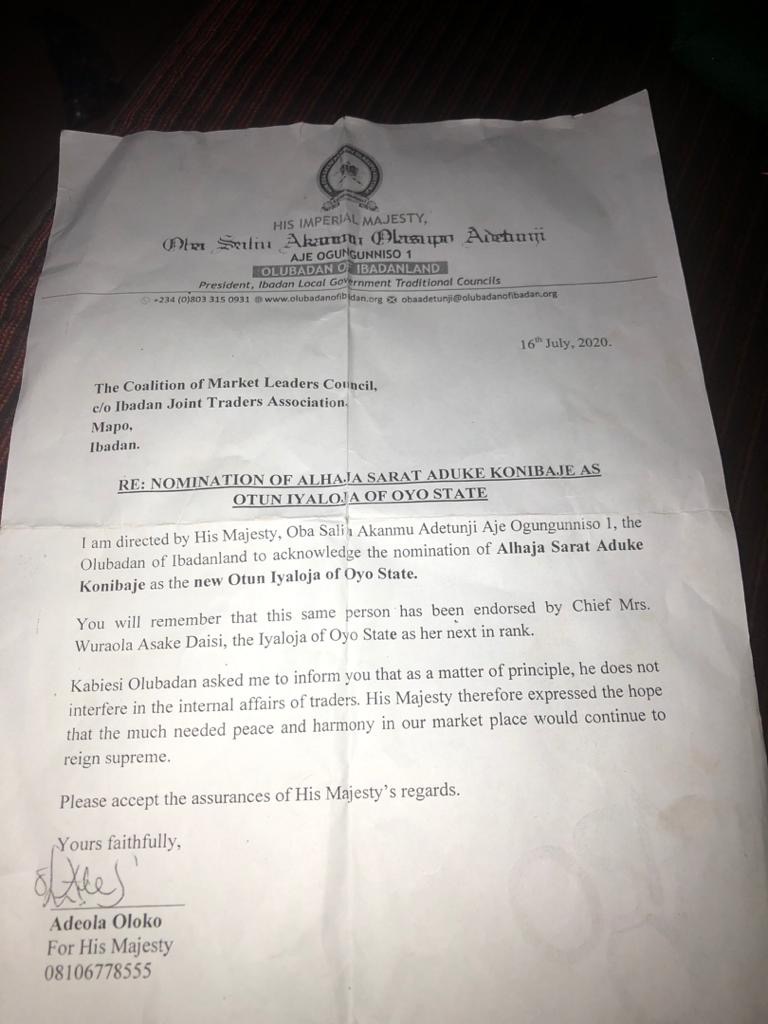 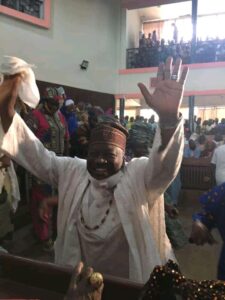 Shortly after the Chief Press Secretary to Oyo State Governor, Mr. Taiwo Adisa released a statement in which he confirmed Governor Seyi Makinde’s approval of His Imperial Majesty, Olubadan of Ibadan, Oba Saliu Akanmu Adetunji’s installation of Alhaji Y.K. Abass as Babaloja of Oyo State, a group, Coalition of Traders in Oyo State has kicked against what they called imposition and promised to defend their association’s constitution.

The group, in a letter signed by three of its members, Comrade Ajala, Comrade Abu Abioye and Comrade (Mrs.) Oyewo, and made available to journalists on Tuesday evening in Ibadan, condemned the decision of some individuals to cause crisis in the association.

“It’s an embarrassment and very disgraceful that some individuals could nursed idea of imposing a leader on over two million market men and women in the state at the period when everyone is praying God to completely drive Covid-19 away from Oyo State to enable normalcy returns and end the suffering of our dear people.” 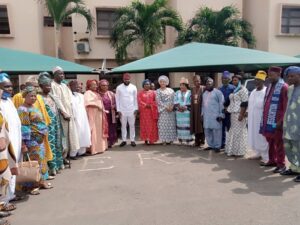 The group went further to list their submission as follows:

“That at the House of Chiefs, Agodi Secretariat, Ibadan where Alhaji Sumaila Aderemi Jimoh was elected as Babaloja of Oyo State all zones have their Iyalojas and Babalojas in attendance, including Okeogun, Ibarapa, Ogbomoso, others are the 4 zones from Oyo Town.

“That the process that produced Alhaji Sumaila Aderemi Jimoh as the Babaloja of Oyo State followed due process and was conducted in line with the constitution of our association. This was the reason why their wasn’t any objection or rancour throughout the process.

“It is pertinent to also state here that our association, like every other associations or unions registered with the Corporate Affairs Commission (CAC), in accordance with the constitution of the Federal Government of Nigeria.

“Just like no one can singlehandedly impose leader on any of these, NMA, NBA, NFF, NSE, NLC, TUC, it would be very impossible for any one to impose a leader on our association. We have constitution and it must be adhered to, to avoid crisis.

“We know and believe the state governor Engr. Seyi Makinde is a lover of peace and a respecter of rule of law. He would not want to go against the rule of law which he has also benefited from when governorship election that produced him was challenged in the court of law. Neither would the governor be interested in any issue capable of truncating the peace currently enjoy by the good people of Oyo State.

“We also know Kabiyesi, His Imperial Majesty, Oba Saliu Akanmu Adetunji, Aje Ogungunniso 1, to be a defender of his subjects, promoter of people, who always stand against injustice, especially of this nature; which is similar to what late Senator Abiola Ajimobi was trying to carry out when he embarked on illegal restructuring of Ibadan Obaship Titles. It is on record that Kabiyesi resisted this evil agenda very unrepentantly.

“To also buttress our assurance on Kabiyesi’s zero tolerance for injustice. His Majesty has once sent us a letter on similar issue, the letter was on Kabiyesi’s letterhead paper and signed by Adeola Oloko on 16th July, 2020. It reads, ” Kabiyesi Olubadan asked me to inform you that as a matter of principle, he does not interfere in the internal affairs of traders.” Counting on this, we have the believe that some selfish individuals are those misleading His Majesty on this issue.

“As law abiding citizens we hereby appeal to the state governor, Engineer Seyi Makinde, the Commissioner of Police, Heads of other security agencies, the traditional rulers, religious leaders, leadership of Nigeria Labour Congress, Trade Congress and personalities in the society to as a matter of urgency and necessity intervene to prevent looming crisis and possible break down of laws and order,” the group appealed.