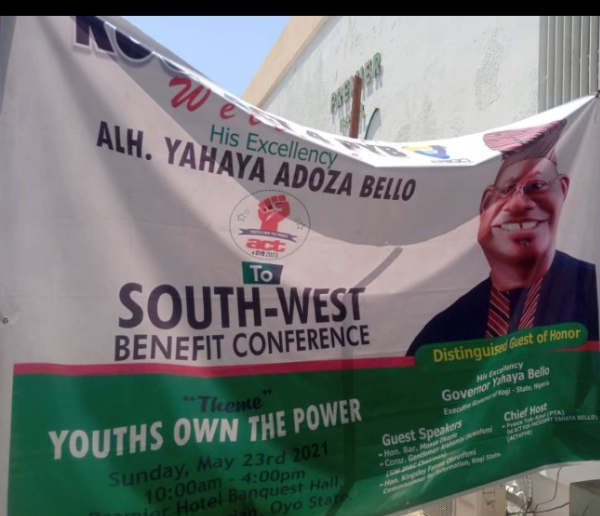 Supporters of the governor of Kogi State, Alhaji Yahaya Bello in the southwest states under the banner of Southwest benefit conference on Sunday kicked-off campaign for the presidential ambition of the governor.
also see:

The event which is currently holding at the premier has in attendance his supporters from the six states of the southwest, including Kogi and Kwara.
Oyoecho reports that Yahaya Bello who is a second term governor of Kogi state recently met Presidential Muhammadu Buhari on Thursday where he briefed him on his presidential ambition.
Oyoecho recalled that the governor said he has received calls from a significant number of persons asking him to run for president in 2023.
Our correspondent gathered that Bello also conveyed the president’s message that Nigeria’s unity is not negotiable as he promised a more secure and prosperous nation in the days ahead.
Oyoechonews recalled that Governor Bello’s meeting with the president comes less than 24-hours after the Amalgamated Union of Foodstuff and Cattle Dealers of Nigeria (AUFCDN) agreed to lift its ban on the supply of food to the southern part of the country.