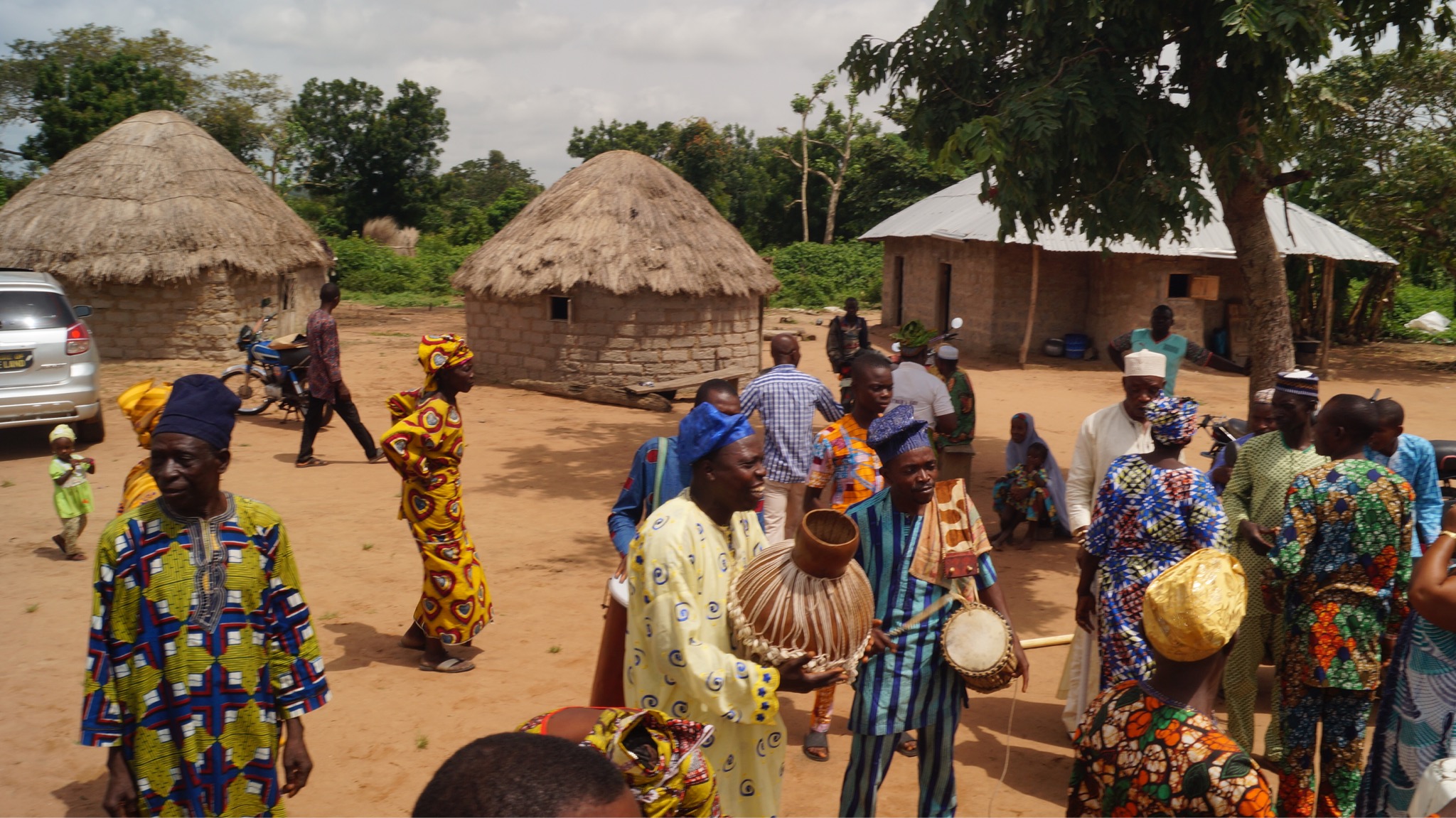 Epidemic diseases contacted through water consumption have killed scores of residents of Idi-Emi, Sepeteri, and some remote areas of Saki in Oyo state. Many of the residents were hospitalised severally as a result of contaminated water consumption in the past. They traveled between 20 and 30 kilometers before they could get water for drinking, cooking and washing. It was usually a tough time for them during dry seasons because the stream dry-off. In some cases, the residents defeacate in stream because of lack of presence of government and social amenities in the communities. They believe the stream water flushes their waste away while they value the same water coming out from the other end of the communities for drinking. In some of the communities where their forefathers migrated in centuries ago, many residents tasted tap water only once in a year when they visit cities for festival while many never had the opportunity of tasting good water apart from the steam water.
Many children born in these areas never understood the beauty of having good water. Sadly, dwellers in these communities were killed during the outbreak of epidemics as a result of the water challenges.

For instance: during outbreak of cholera in Oyo state, it was gathered that many were killed while some were evacuated to hospitals in nearby towns.

According to some of the residents in the affected areas, it took the intervention of the local government officials and health workers to stop the epidemic from spreading to other areas.
In every four years, politicians visit them and raised their hope by promising them unfulfilled water projects.

Some of the residents of those communities who spoke with Ekotrust crew described their experiences as pathetic.

A middle age man, Tajudeen Ogummodede in idi-eme area of the community said many of their children never had the opportunity of drinking good water. “As you can see, our job in this settlement is farming. The only problem we are having is social amenities like water and electrification. I am sure my children never tasted tap water before now. But thank God our story is changing today. ”

Another resident, Kehinde Ojerinu said the dwellers in the community have suffered for many years. “we suffered water a lot in this community, the water we consumed was full of germs due to the dirty and refuse our people dumped in the stream and yet that is the same water we drink.”

Nofisat Adebola, a trader in her submition said governments at all levels have forgotten the dwellers: “water has been our major problem. Our people used to fetch water from a river called Akindi, and this river is conterminated because this is the same place people dump their refuse and defecate to. Our people contacted diseases through the conterminated water they consumed from the stream and as a result, many have died.”

An octogenarian, Alhaji Busari Agorobogunbolu said “it has been a while we have been suffering from quality water and light.”

A female corp member who craved for anonymous told our correspondent that: “searching for water in this community is like miners searching for gold.”

Worried over their ordeal, the Oyo State Community and Social Development Agency (CSDA) in conjunction with the World Bank changed the narrative. The people in those communities approached the agency to rescue them from further epidemic attacks on their people.

The General Manager of the Agency, Mr. Adewole Babatunde who led the team of Ekotrust to the numerous projects implemented by the communities through the support of the Agency of the Oyo State Government, CSDA with the world bank assisted fund across the state described the intervention as timely for the people of the affected areas.

Babatunde said many communities across the state have benefited from the gesture and the agency wish to do more for development of the rural communities in the state. He explained that usually, the communities set up a committee headed by an elder in the community and appoints chairman, secretary and treasurer to oversee the project. “What we does was to provide financial support for the communities. We asked them to provide 10 percent of the overall cost of the project and we raised 90percent to fund the project. It is a counterpart funding by the Oyo state government and the World Bank to bring development to the rural communities. The communities do the construction themselves.”
Some of the projects are: classrooms, electrification, water, community halls, bridges, roads, drainages, police post and health centres.

Babatunde further said: “As you can see in Isale Odo and Kishi in Irepo local government area, the community installed 500KVA Transformer and Extended Electricitrification, coupled with Completion of Community Hall, and Drilling of two Motorised Borehole.

“The people of Surulere Community, SAKILAP, Weewe Local Council Development Area (LCDA) also benefited from electrification after many years of neglect with 2Unit Motorised Borehole and Health Center in their community.

“In Ajaawa, and Oosu, Ayigbiri communities of the state, CSDA also funded construction of Examination Hall, implemented by Omo Obate Community Project Management Committee (CPMC) at Baptist Grammar School, Ajaawa and a Block of Science Laboratory at Community High School, Oosu, Ayigbiri, all in Ogbomoso axis of the state.

“In Saki west local government area of the state, we supported construction of Health Centre and Bridges for Elegbo community for betterment of livelihood.”

Babatunde said the project was not limited to outside Ibadan but the people of Ibadan also benefited from the counterpart funding.

According to him, the areas in Ibadan include; Ogbere and Anuoluwapo communities in Ona-ara local government of Ibadan the Oyo state capital where people were living in black out for over five years before intervention of the CSDA.

Dwellers in those communities appreciated the gesture and promised to maintained the projects for future generations to benefit.

Jimoh Tiyamiyu, a resident of Isale-Odo in Saki area of the state said “the commitment of the community towards electrification of the community was just 10 percent of the total amount spent on the whole projects. We choose electricity as a result of the necessity of power to us, we also demanded for water and completion of our ongoing community hall project.
“These projects will boost the economic and livelihood of this community because some business has already been folding up as a result of the low current of light and non availability of water in the community, but we are able to overcome this problems through this intervention.”

Another resident of Saki, Pastor Lawrence Bamgbopa, who said the community was in black out for many years said “we converged at a community meeting and we resolved that we needed health center which was constructed for us. Before now, we had a problem of Health facility. The one we are using before was not adequate enough, and it’s location was very far. “Before now, we rented an apartment which serve as our health center, and there was no enough space to admit patient because the place was not convenient.”

For the residents of Ajaawa, it was a classroom for their children. One of the parents, Pastor Thomas Oluwole Adunole said the intervention has eased a lot of our stress in the community in terms of the academic well fare of their children.

“The one our children were using before was a death trap for our students. We have been trying all our best to resolve this issue and luckily, CSDP came to our aids and relieved us of this challenges which was a great relief. CSDP also built a Science laboratory for us at Community Grammar School, to allow our students to have access to quality and practically science learning and hopefully, a motorised bore hole will also be giving to us at the completion of these two projects. This projectshas been denying our students to write their exam in this school as a result of inadequate examination hall, we used to dispatched our students to a neighbouring schools to sit for their WAEC exam, we were told unless we have a good examination hall, our students will not be allow to do their WAEC examination here in this school because of the bad condition of our exam hall and rain that use to disturb our students while writing their exam.”