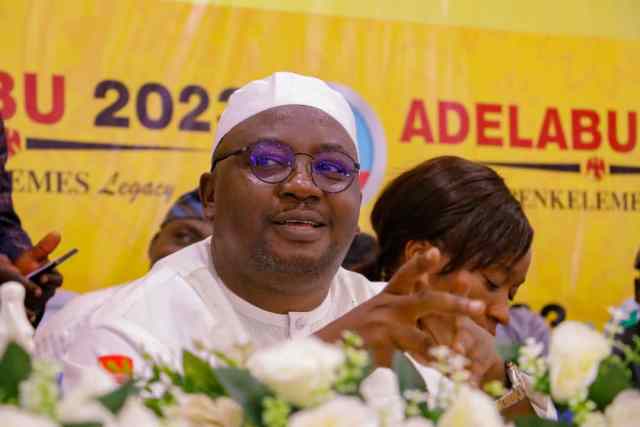 Chief Adebayo Adelabu, the Accord party governorship candidate in Oyo State has said that the party would spring surprises and make history in the 2023 general elections.

Adelabu gave the explanation during a radio programme tagged ‘Political Circuit’ monitored in Ibadan on Saturday.

Adelabu, a former CBN deputy governor was the APC governorship candidate in the 2019 general election in the state.

He had defected from the APC to Accord party, where he secured the governorship ticket, due to alleged irregularities in the broom’s party primary election.

The governorship candidate said that Accord was not a third, but main force in the 2023 general election in the state.

Adelabu said that such forces like All Progressives Grand Alliance(APGA), Labour Party(LP) and Congress for Progressive Change(CPC) had in the past won elections in Anambra, Ondo and Nassarawa respectively.

The governorship candidate said that it was even more positive and better in Oyo State than the three aforementioned states, most of which grew up organically.

He said that former Gov. Rashidi Ladoja expressed joy when him of his readiness to pursue his governorship ambition in Accord Party come 2023.

Adelabu said that Ladoja had years back contested the governorship on the platform of Accord with huge followership, though came second in the election.

“I went tell Baba Ladoja that I am going to Accord to pursue my Governorship ambition. He was so happy that he will witness the first governor on the platform of Accord in the state.

“He was excited because he is synonymous with Accord in Oyo State. This is because he contested on the Accord platform and secured almost 300,000 votes.

“Why won’t he be happy? He was very happy and very supportive. He knew I was coming to Accord to complement the existing structure in Accord with my over 300,000 votes I had in 2019,” he said.

He said that his group was moving the APC into Accord to complement its existing structure, saying Accord is a container with its content as 80 percent of APC members in the state.

The governorship candidate said that the candidates fielded by Accord were largely drawn from the APC with their huge followership.

“I can tell you authoritatively and yet to be proven otherwise, that 70 to 80 percent of APC members are following us to Accord,” he said.

Adelabu said that the Peoples Democratic Party(PDP) was also divided, saying several groups have pulled out of the party while some are waiting for the final whistle.

He did not rule out possible collaboration when they have agreement in morals, values and ideologies, adding there was nothing of such now.