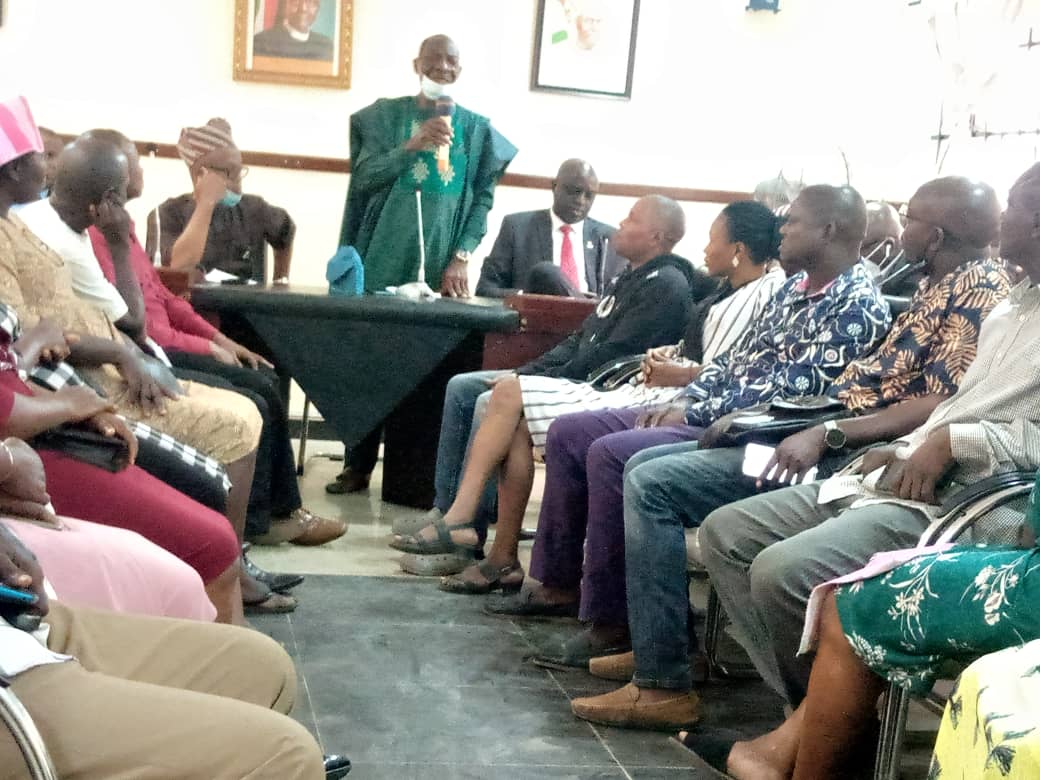 “It is very instructive that as local government staff, you make use of proper counselling, associate with people who are cerebral, visionary and positive-minded, as well as ensure that anywhere you find yourselves, you are  good ambassadors of the service.”
These words of encouragement were given by the Chairman, Oyo State Local Government Service Commission, Hon Aderemi Ayodele to the  staff, at the Conference Room on Thursday, during the New Year special prayers, organized by the Commission to usher in the year 2022, at the State Secretariat, Agodi, Ibadan, Oyo State.
Speaking further on the occasion, Hon. Remi Ayodele who was accompanied to the epoch-making event by the state Civil Service Commission Chairman, Alh. Kamardeen Aderibigbe, further enjoined the members of staff of the Commission to exhibit agape love for one another, reminding them that when they do and forgive their offenders from the bottom of their hearts, they too would be able to progress in life.
While showering encomiums on the permanent secretary of the Commission, Mr. Akin Funmilayo, for his foresight, untiring spirit, friskiness and sagacity, Hon. Ayodele attributed a great percentage of the Commission’s programmes, projects and achievements to the former’s resourcefulness and initiative, through the full support and cooperation of the management and staff.
A statement by the
also see:

Director of Education and Social Services, Adeola Oduola indicates that the Oyo State  Commission boss also used the medium to solicit for special prayers from all and sundry for His Excellency, Governor Seyi Makinde, so that he could finish his first tenure without any ado, and equally secure the second term ticket effortlessly.
In his goodwill message, the state Civil Service Commission Chairman, Alh. Kamardeen Aderibigbe, also highlighted the series of achievements that Governor Seyi Makinde had recorded since inception, imploring the workers to reciprocate the  Governor’s kind  gesture by performing creditably at work so as to justify the confidence reposed in them. He further enjoined them to be more ambitious in their academic pursuit so that they could compete favourably with their colleagues from any quarter, reminding them that the appointment of people from the local government extraction into the present administration is unprecedented in the annals of the state.
Earlier in his opening remarks, the Commission’s  permanent secretary, Mr. Akin Funmilayo, had intimated the gathering that the essence of coming together was to appreciate God for His mercy and love over every member of staff, as well as the political functionaries. He also appreciated God for GSM-led administration in Oyo State for putting smiles on the faces of Oyo State people, especially workers, who are being paid as and when due, topping it with the 13th month salary. He then  succinctly mentioned the achievements of the Commission in the outgone year bordering on conversion of staff, training and retraining of both junior and senior staff in the Local Government  service, as well as promotion of staff from 2017 to 2020, with their promotion letters already released to them all. Mr. Akin Funmilayo also averred that the state executive council had approved the establishment of Local Government Staff Loans Board, thereby making it much easier henceforth for council staff to obtain loans, be it for vehicle or housing. He rounded off his remarks by urging the Commission staff in particular, and local government workers in general to be more dedicated and committed to their duties.
Highlights of the occasion included special prayers in both Islamic and Christian ways by Alfa Muideen Rahaman and Pastor Bankole Johnson respectively.
The auspicious gathering was graced by all  the management team of the Commission.