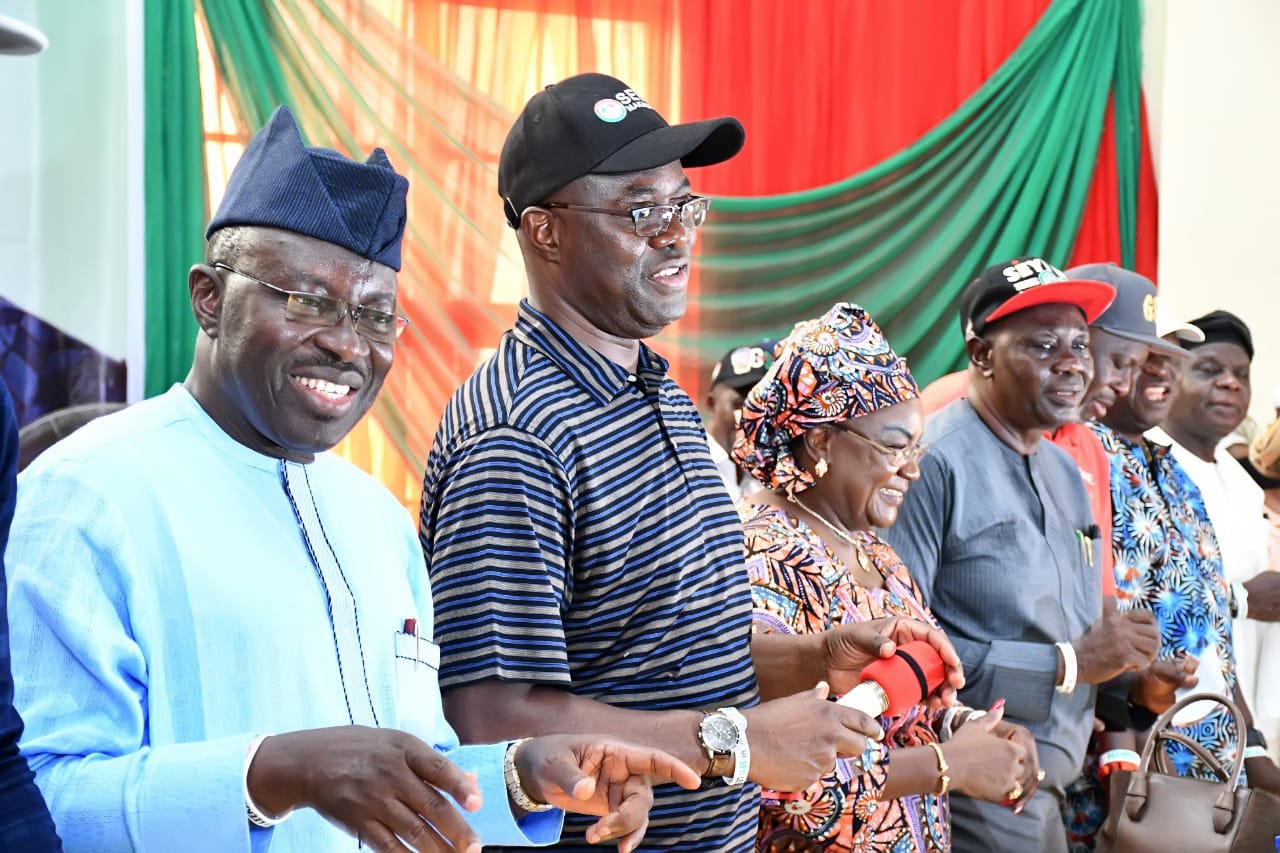 Oyo State Governor, ‘Seyi Makinde, late on Tuesday and Wednesday Morning, held Consultative and Town Hall meetings with stakeholders of the Peoples Democratic Party (PDP) in Oyo Federal Constituency, where he urged the electorate to vote for candidates of the party in the forthcoming general elections.
The governor said that the PDP has become stronger in the Federal Constituency following the resolution of the internal wrangling among its members.
A statement by the Chief Press Secretary to the governor, Mr. Taiwo Adisa, quoted the governor as saying that he was confident that the PDP would win all elections in the zone, as according to him, he has fulfilled over 80 per cent of his campaign promises to the people.
The statement indicated that the governor, who met with all critical stakeholders in Oyo on Tuesday and Wednesday, said that all the aggrieved members of the party in the constituency had been reconciled so that it could go into the general election as a united family.
Speaking at the Town Hall meeting, held at the Atiba Hall, Oyo,  Governor Makinde declared that if he is re-elected, there would be an upgrade of good governance, hence the campaign theme Omituntun 2.0
He charged all residents and indigenes of Oyo State to vote for all candidates of the PDP in the 2023 general election.
The governor also reeled out the achievements of his government in Oyo zone as including; the building of the ultramodern Akesan Market; construction of Gedu-Oroki-Sabo Road; the renovation and equipment of Primary Health Care Centres and the Light-up Oyo Project, among others.
Governor Makinde equally used the opportunity to refund the nomination fees of all PDP aspirants for National and State House of Assembly positions in Oyo zone, adding that similar gesture would be extended to all PDP aspirants across the state.
Declaring that the PDP would win convincingly in Oyo State in 2023, Governor Makinde called on all members of the party in the state to work together and give maximum support to the party’s candidates so that they can emerge victorious in their elections.
The governor also led a house-to-house campaign in Oyo town, where he canvassed residents of the historic town to support his party and its candidates in the coming elections.
also see:

The Town Hall meeting had in attendance all the party leaders and stakeholders in Oyo zone as well as all the party’s standard-bearers for the National and House of Assembly elections.
The governor said at the meeting: “I have been here in Oyo since yesterday (Tuesday) to address some of the issues and we thank God that all the differences have been resolved.
“I know that we have done a lot of projects we promised during our electioneering for the 2019 election. At least, 80 per cent has been actualised but a few things are yet to be done because no system is perfect.
“So, why we want to hold the Town Hall meeting is to make sure you speak where you feel the attention of the government is needed and we will listen to you. We would go back to our manifesto, the Roadmap for Sustainable Development, 2023-2027, where we have our programmes and policies for the next administration, to ensure that we incorporate whatever you tell us here.
“The reason we have not flagged off the open campaign is because we decided to arrange our house internally by settling some rancours before we go outside. We want to settle some differences and ensure we are on the same page with ourselves, including those who are aggrieved. And I am actually happy that all the differences in Oyo have been resolved.
“So, the consultative meeting and the Town Hall meeting for our 2023 campaign are what we have started in Oyo. I want to tell you that the way you supported us in 2019 is the same way we want you to aggressively work for us for the 2023 election.
“The Omituntun 1.0 we started in 2019 will get terminated in May 2023 and we will begin Omituntun 2.0 by then and end it in 2027.
“We started the Gedu-Sabo-Oroki road project and completed it in this same administration, and our people have been using it. Also, the Light-up Oyo Project was started in this administration and we have covered a majority of the main roads here.
“Since we came in, we have consistently paid the salaries of our workers. We are also building one PHC in each ward and I came to commission one in front of the Palace here.
“Coming from Fasola Farm Estate to Oyo town used to be difficult for our people but when we came in, we decided that we would link Oyo through Fasola to Iseyin and the road is ongoing. They have done 11 kilometres of the road. Before the end of this administration, they would have laid the asphalt beyond the Odo-Ogun Bridge. All these projects were achieved under Omituntun 1.0.
“So, in Oyo State, our plan is to upgrade to Omituntun 2.0 and we need the support of all of us to achieve that. All other candidates you are seeing their billboards here and there can be likened to a ‘flood’ aiming to destroy a house, but you are the ones that would stand firmly to avert that.”

APC Slams Makinde Over Plan To Renovate Police Station With N578million, Says His Campaign Flag-Off Was Show Of Shame