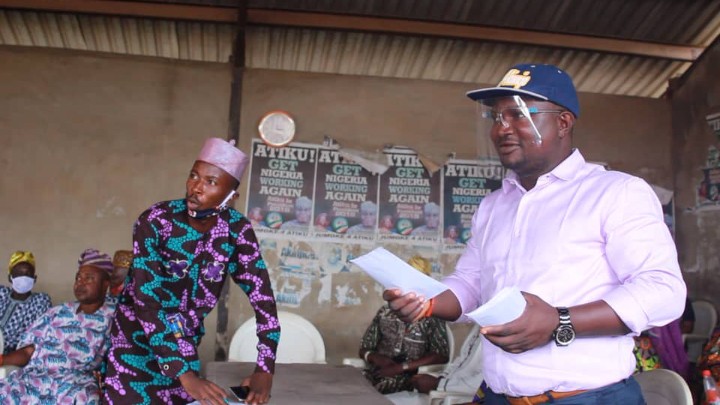 As part of his efforts to bring succour to the people of his constituency, a member of Oyo state House of Assembly representing Ibadan North East, constituency I, Mogaji Olamide Akinajo has empowered youths, market women and aged with N5million.
The lawmaker who gave out cash to empower his constituents to commemorate his one year in office, said the gesture was to give back to his people.
The event which was held at Akinjide House, Along Gbelekale, Oritaperin Road, Ibadan was attended by Ibadan East LCDA caretaker chairman, Hon. A Babalola and all executive members of  PDP in Ibadan North East local government, led by Hon. Taiwo Iyiola.
Akinajo said: “The current financial situation in the country calls for desperate measures, so the cash disbursement is to enable the beneficiaries start small scale businesses, which will help them cater for their immediate families and reduce hunger “.
He pleaded with beneficiary to make use of the cash giving to them.
Mogaji Akinajo had earlier began rehabilitation of abandoned water boreholes in all Wards of his constituency. He said
government is continuum and he as a lawmaker is tolling the steps of governor Makinde in rehabilitating and transforming the local environment.
” it is true that the none functioning
and abandoned water boreholes was erected by past administrations but the money is not took from their pockets, those projects were erected with government money for residents, now most are not functioning again and our people are lacking good water, so i discussed with some local government stakeholders and agreed with me that we should get all none functioning boreholes  functional before we can embark on erecting new water boreholes.
Mogaji Akinajo implored residents  to protect the rehabilitated infrastructure in their area.
The lawmaker praised Governor Seyi Makinde for ongoing transformation in Oyo state, said,
the governor’s love and passion for the development of the state and own local government is immeasurable.
Party Chairman, Hon. Taiwo Iyiola hailed Mogaji Akinajo for ongoing rehabilitation of abandoned water boreholes project in all the six wards and empowering his constituents to lessen their hardship.
He urged Ibadan North East Constituency 1 residents to continue to support the government so that they can keep enjoying the dividends of democracy.
Speaking on behalf of the beneficiaries, Mrs Adebare Aduke, a petty trader, lauded Mogaji gesture and his efforts to alleviate poverty and reduce untimely deaths in her constituency.
” My mother and other aged people benefitted from Health Outreach Project organised by Hon. Akinajo last year, the project was laudable because most of the beneficiaries  testified to the medical check up and drugs given to them to be very effective. Months after, Hon. Akinajo again gathered us her for money empowerment, God bless him for us, Mrs Aduke prayed.
also see: