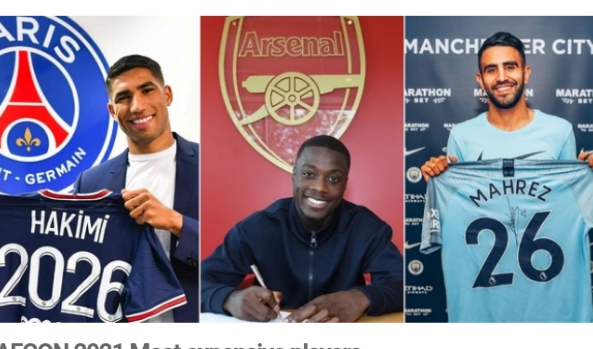 The continent’s best players around the world are back to participate in the upcoming Africa Cup of Nations (AFCON).
10. Mohamed Salah
Now rated one of the best players in world football, back in the summer of 2017 Liverpool snapped up Egyptian forward Mohamed Salah for £43.9 million with add-ons.
He has since won the African Player of the Year on two occasions and inspired Liverpool to a Premier League and Champions League title.
9. Sadio Mane
Sadio Mane is another Liverpool star who makes the list. The Senegalese international joined the Merseyside team from Premier League rivals Southampton for over £37 million.
8. Sebastien Haller
Ivory Coast star Sebastien Haller is next on the list.
The Ivory Coast striker is now with Ajax Amsterdam, however his earlier move from German giants Eintracht Frankfurt to Premier League outfit West Ham United was for a whooping £45 million.
Thomas Partey made a big money move to Arsenal from Atletico Madrid
Thomas Partey made a big money move to Arsenal from Atletico Madrid Pulse Nigeria
7. Thomas Partey
Ghanaian midfield enforcer Thomas Partey made a sensational move from Spanish La Liga giants Atletico Madrid to Premier League outfit Arsenal back in 2020.
The move was for £45.3m which puts him at sixth on this list.
6. Naby Keita
Naby Keita is the third Liverpool player on this list.
The Guinea international joined Liverpool back in 2018 from RasenBallsport Leipzig for £52.75 million.
He has also won the Champions League and Premier League but has not had the same impact as Salah and Mane.
5. Pierre-Emerick Aubameyang
also see:

Handkerchief Messi Used To Clean His Face During Barca Farewell Up…

Gabon striker Pierre-Emerick Aubameyang is fifth on the list.
He joined the Gunners from German Bundesliga outfit Borussia Dortmund’s Aubameyang for £56 million despite interest from Real Madrid.
4. Achraf Hakimi
Moroccan full-back Achraf Hakimi is fourth on the list.
After helping Inter Milan win the Italian Serie A the 23-year-old made a mega-money move to French Ligue 1 powerhouse Paris Saint Germain for £60million.
3. Riyad Mahrez
Algerian captain Riyad Mahrez is third on this list.
The 30-year-old made it clear of his intentions to leave Leicester City back in 2017.
The move would eventually go through when Manchester City spent £60 million with add-ons.
He has since been part of the Cityzens dominance of English football.
2. Cedric Bakambu
Democratic Republic of Congo forward Cedric Bakambu comes second on this list.
Bakambu was having an excellent season with Spanish La Liga side Villarreal during the 2017-18 season.
After netting, 15 goals he made a move to Chines Super League side Beijing Guoan for a mouth-watering £65 million
1. Nicolas Pepe
Top of the list is Ivory Coast forward Nicolas Pepe.
Back in 2019, Pepe joined Premier League outfit Arsenal from French Ligue 1 side LOSC Lille.
The move cost the Gunners £72 million, although Pepe has since failed to live up to the price tag.

Makinde Is A Promise-Keeper, Fulfilling His Promises – Olatunbosun