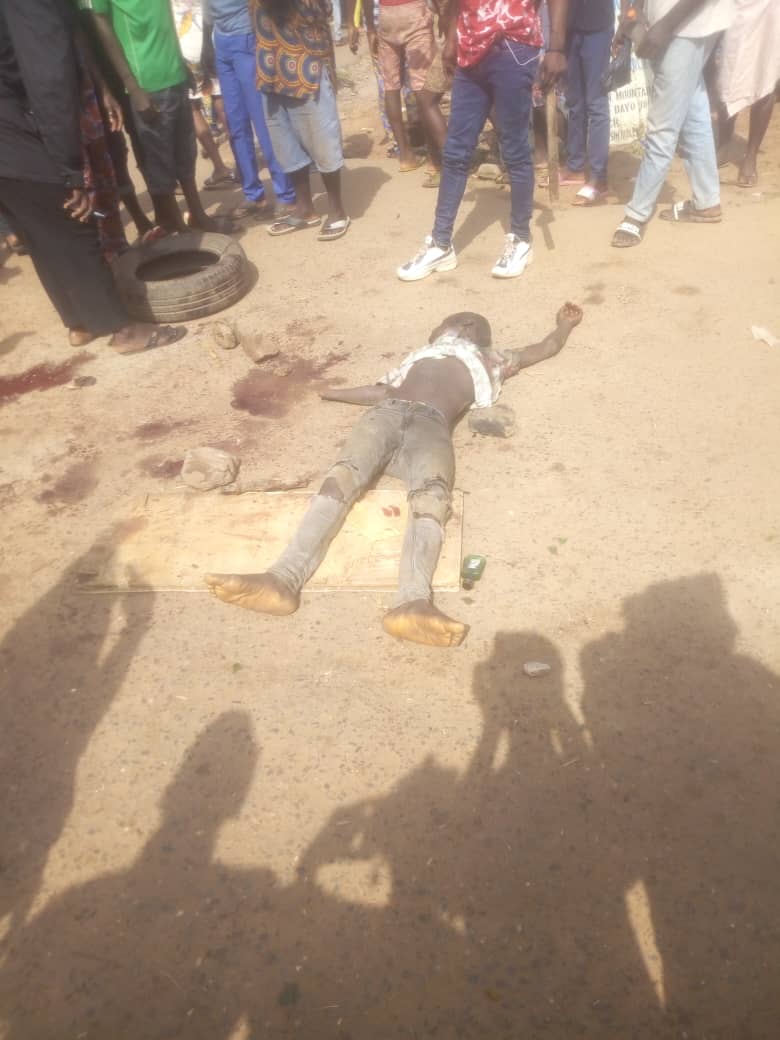 A father and his son suspected to be Kidnappers in Ajadi area, along General Gas, Iyana-Church-road in Ibadan, the Oyo state capital on Sunday met their Waterloo as youths of the area arrested one and set the other ablaze.
Our correspondent gathered that the two kidnappers engaged in ritual killings of a 14-year-old, Kodiri son of.a landlord living in the area.
Owolabi, a landlord in the area and his son, Bodmas confessed over the killings of a 14 year old Kodiri.
Kodiri was declared missing by his parent on Saturday following his failure to return to his family after he went out with a friend in search of Bricklaying job in the area.
The bush path leading to the old Diary farm part of which formed the Kolapo Ishola estate which also extended to Iyana church area provided a good hiding place to perpetrate the gruesome act of ritual killings for Owolabi and his sons Biodun.
On Sunday morning some of the youths within the area who have turned a portion of the Diary farm to avenue to smoke marijuana and sometimes to defecate found the slaughtered body of Kodiri in the bush .
When the lifeless body of Kadiri was retrieved from the bush, it was discovered that his right hand has been amputated while his heart has also been harvested.
This gory sight infuriated the youths who promptly searched for Biodun having discovered that they were seeing together last on Saturd,  Biodun promptly pointed to the bush where  Kodiri was killed and that his father Owolabi had instructed him to do so.
While some Youths were dealing with Biodun another set of the youths went for Owolabi , he was promptly arrested after a confessional statement and was immediately set ablaze.
One of the youths in the area who volunteered to speak with our correspondent said Biodun had earlier named some other accomplices who were also involved in the ritual business.
All effort to reach the Police public relations office, Gbenga Fadeyi proved abortive as he did not pick his calls for comment.
also see: