You’re Living In Fools’ Paradise Of Yourself, APC Replied Makinde On Popularity Claim 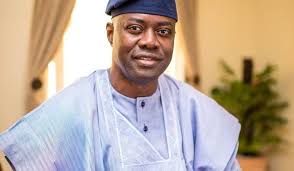 The All Progressives Congress in Oyo state has charged Governor Seyi Makinde to accept the reality of his unpopularity and lack of promise on account of poor performance in office after spending about 20 months in the saddle with no concrete achievements.
Governor Makinde was recorded to have claimed that he was still popular among residents of the state against the background of increased criticisms from political watchers and stakeholders who felt his administration had a long way to go if it planned to deliver on its pre-election promises of 2018/2019. The governor, at the weekend, reportedly challenged his critics to an ‘open credibility’ contest on the streets of the popular Oje market in Ibadan, the state capital.
While reacting to Gov. Makinde’s claims through a statement issued on Monday and made available to newsmen in Ibadan by its interim Assistant Publicity Secretary, Prince Ayobami Adejumo, Oyo APC submitted that the PDP governor was still living in fools’ paradise if he could boast of being popular without any proof of outstanding performance in office.
“The worst thing to have happened to Oyo state since its creation in 1976 is an executive governor still basking in the euphoria of winning an election two years after. Rather sit down to work for the state, Gov. Makinde wakes up every morning to take a joyful look at the result sheet of the 2019 poll which brought him to power. As a result of this, he does not care to appreciate what is expected of him in a tenure of four years.
“It is highly unfortunate for the good people of the state who had desired continuity of good governance after the expiration of the eventful and glorious two terms of late Senator Abiola Ajimobi to be faced with the tribulation of another PDP occupants in the Agodi Government House especially as the Makinde administration has turned out to be a disappointment for all and sundry.
“To address the question of delusional popularity claims, we would like to ask Gov. Makinde what he has in the last 20 months to better the lot of the state. Can a governor who recently promised to start performing in this 2021 still claim to have merited popularity? Where, in the whole world, does a governor challenge individual critics to a road show contest in his locality if not a man who has chosen idleness in power?
“Does Gov. Makinde he could still be.popular when it is clear he gave false hope to mislead unsuspecting voters? Can a Chief Security Officer of a state claim to be popular when he has failed to save his people from insecurity even as his ceaseless error continue to cost them their lives and property everyday? Can a governor in a state like Oyo who has failed to work with all relevant stakeholders be said to be popular? As at today, Gov. Makinde is not even popular within his government as virtually all his appointees groan because he runs a one-man show.
“Is Gov. Makinde thinking that everything ends with his induced popularity among givers of fraudulent loans, imposed Park Managers and aliens currently sleeping and feeding fat at the Government House. How can a governor who failed to justify the poor management of huge financial resources accrued to him through monthly allocations from Abuja, billions of naira from monthly internationally generated revenues, over 100 billion naira loans, grants and subventions from known and undisclosed sources in the last 20 months as well as proceeds from sales of government properties lay claim to any popularity among his victims?
“Since his access to state funds would afford him the opportunity to rent a crowd of cheer-givers and sycophants at will, Gov. Makinde cannot understand the enormity of hatred he has in the hearts of Oyo PDP leaders and members, not to talk about most members of the coalition group who helped him in 2019, as he continues to punish them unjustifiably. The only state with a record of frosty relationship with the Federal Government is Oyo and as if this was not enough, Gov. Makinde has decided to ostracize the Police and other federal security agencies in his state.
“However, if ‘street credibility’ is all what Gov. Makinde craved for during and after his four-year tenure of office, we would have to appeal to those expecting him to add value to governance to tarry a while and redirect their expectations while the good people of Oyo state warm up to correct the mistake of 2019 by voting for the candidate of the APC in 2023 to enable have a full dose of good governance and responsible leadership as it was the case between 2011 and 2019.” Oyo APC submitted.