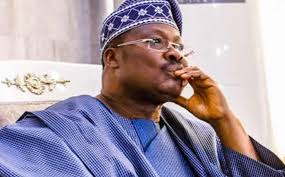 The Vice Chancellor of Ajayi Crowther University, Oyo, Professor Dapo Folorunsho Asaju has on Monday disclosed that the family of the immediate past Governor of Oyo state, Late Senator Abiola Ajimobi has been generous to the university since its creation.
Asaju made this declaration while paying a condolence visit to the family of the late ex-Governor.
Late Ajimobi who ruled the state for eight years was buried last month in Ibadan, the state capital.
But, Asaju while leading principal officers of the institution to the Oluyole residence of the late former Governor on Monday described late Ajimobi as a benefactor of the school.
also see:

He said that the former Governor and his family including his wife have contributed immensely to the growth of the institution.
According, “We are here to pay our condolence to the Ajimobi family for the passing on of his Excellency. He has torched our life in many ways. He was the one that commissioned the Vice Chancellor’s lodge. He was personally present there.
“The wife holds a doctorate degree of the university, and she donated an ICT center to the university. There are students who are enjoying scholarships of the family at the institution.
“The family has been generous to us. So, we are paying this condolence visits to thank the family for what they have done in our life.
“We are paying a condolence visit to our mother on behalf of the institution, the management and the students. He was an enigma, very generous, very down to heart, very and very humble. Highly discipline and very principled”.

Ajimobi’s Family Apologises To Olaniyan, Says He Was Late To Fidau Prayer