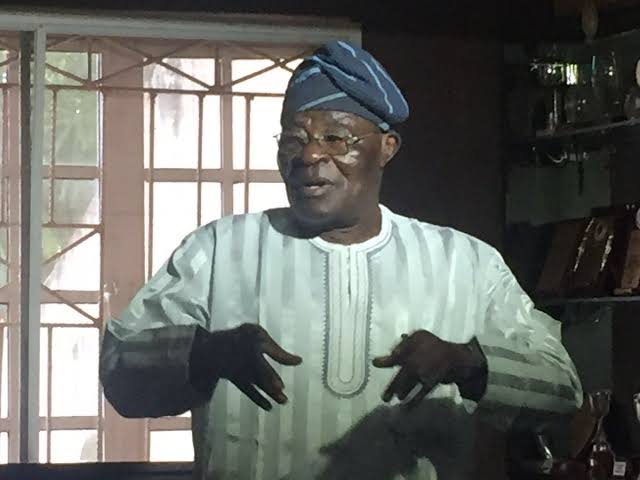 The leadership of the All Progressives Congress in Oyo state has again condemned suspicion of division or fragmentation within its fold warning those “peddling rumours indicating existence of factions or warring groups in the Party to desist from such act or risk being visited by retributive justice.
Oyo APC, which was recently thrown into mourning mood following the death of its leader, Senator Abiola Ajimobi, had in 2018 witnessed some internal wrangling which resulted in the floating of a splinter group named Unity Forum through which virtually all the aggrieved members left the party to join the then opposition Peoples Democratic Party (PDP), African Democratic Congress (ADC) and Action Democratic Party (ADP) in the build up to the 2019 general elections.
In a statement he personally signed and made available to journalists in Ibadan on Monday, the state chairman of Oyo APC, Chief Akin Oke, took a swipe at some people he categorized into “two groups of mischievous elements who either seek to portray the party in bad light to the outside world with a view to actualizing their own selfish political goal and the other one made up of shameless persons who want to return through the back door after abandoning the party over two years ago.
“These groups of unscrupulous and insidious characters move about to give an impression to the outside world that our party is fragmented when, in fact, we have only one Oyo APC with legal-binded Executive Committees at Ward, Local Government and State levels as well as elected representatives comprising two Senators out of the three from the state, ten House of Representatives members out of fourteen and six House of Assembly members.
“The same people giving a wrong impression of belonging to factions are those who participated in the last general elections as aspirants, candidates and members of other political parties. Despite putting their best into the mission to stop all the candidates of the APC including President Muhammadu Buhari, they ended up a failure and this explains why they have no serving elected official they can call their own as at today.
“However, there is no denying the fact that most of these people are former members of our Party who left for personal reasons and if any of them now decides to come back, we shall be glad to welcome them back to the fold. We have always been magnanimous to them as we have not, at any time, attempted to block the chances of some of them who have secured federal appointments through the back door. In actual fact, our doors are widely open for them to come back home if they want to.
“To this end, we are ready to reach out to known aggrieved members of our party across the state and this we shall do to complement the efforts of the Reconciliation Committee set up by our late leader, Sen. Abiola Ajimobi, with a clear mandate to resolve all issues and further strengthen Oyo APC. The Committee headed by former Governor Otunba Adebayo Alao-Akala has started its work in earnest and the State Working Committee of the party is determined to carefully consider their reports and recommendations for possible action as soon as possible to enable us plan ahead of future challenges.
“More significantly, the people of the Pacesetter state have seen clearly the difference between the administration of the APC and that of the PDP in just a year while the clamour in town today is for us in the progressive fold to put our house in order and ensure that credible candidates are again fielded to contest in 2023 even as we look forward to holding more transparent party Congresses in 2022 to usher in new set of Executive Committee members at all levels.” The statement concluded.
also see:

I Was Deceived Into Marriage, Wife Counters Man’s Infidelity Allegation In Court