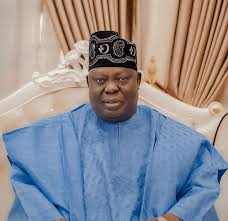 The Chartered Institute of Administration (CIA) has conferred the Fellowship award of the Institute on  Dr. Isiaka Olayinka Kolawole, the current  Deputy Executive Secretary (Services) of the Universal Basic Education Commission (UBEC).
The Conferment of a Fellow of the Institute and the confirmatory elevation of Dr Kolawole to the status of a Chartered Administrator took place at Center for Management Development (CMD), Lagos , after a mandatory workshop on Professional Administrative Techniques held, on Thursday 10th, December, 2020.
Dr Isiaka Olayinka KOLAWOLE was born in Ibadan Oyo State, Nigeria.
He attended the famous Ibadan Grammar School between 1974 and 1979.
He obtained a Bachelor of Science (B.Sc) degree in Economics with Second Class Honours Upper Division from the prestigious Obafemi Awolowo University, Ile-Ife, in 1988.
Dr Kolawole was admitted to the first Department of Economics in Nigeria, University of Ibadan, in 1991 where he graduated with a Master of Science (M.Sc) degree in Economics in 1992. His areas of specialization include Monetary Economics, International Economics and Petroleum & Energy Economics.
In his quest to attain the greatest height in academics, Dr Kolawole proceeded to University of Abuja in 2001 and graduated with a Doctor of Philosophy (Ph.D) degree in Political Economy and Development Studies in 2004. His major academic strengths and specialities include Monitoring & Evaluation, Policy Development, Foreign Direct Investments, Impact Assessment, Globalization and Economic Planning.
To consolidate his robust intellectual status, Dr Olayinka Kolawole went outside the shores of the country to acquire a World Class Professional Certification in Global Leadership at the world’s most prestigious University, Harvard Business School, Harvard University, Boston, Massachusetts, United States of America (USA) in 2014.
Dr. Kolawole is also an alumnus of University of Oxford, Said Business School, Egrove Park, Oxford, United Kingdom (UK), where he obtained another Word Class Certificate in Oxford Finance Programme for Senior Executives, in 2015.
Dr Isiaka Kolawole is a Fellow of the Institute of Economists of Nigeria (FNIE),Fellow, Institute of Management Consultants (FIMC),
Fellow of the Institute of Corporate Administration of Nigeria (FCAI), a full member of the Nigerian Institute of Management, Chartered (MNIM), full member Institute of Directors (M.IoD), and a full member of the Royal Economic Society (MRES), United Kingdom.
Dr Kolawole started his Banking career with Wema Bank PLC in 1990 and left in 1993 as Assistant Manager having headed different units of the bank which include Treasury Operations, Savings Accounts, Loans & Advances and Current Account Operations.
Dr Kolawole joined Resort International Limited, a conglomerate which includes Stabilini Visinoni Ltd, Bi-Courtney Aviation Services Ltd, Homman Engineering Ltd and Alma Beach Estates Ltd in 1993 as The Executive Assistant to the Chairman for six (6) years.
In this capacity, he was responsible for the formulation of plans to sustain the strategic growth and competitive advantage of the Consortium by developing new market niches to capture today’s complex and volatile business milieu.
He also had the duty to review all existing policies to determine the areas of conflicts/contradictions, obsolescence, lapses, gaps etc and propose harmonization of all polices.
In May 1999, the Governor of Oyo State, His Excellency Alhaji Lam Adesina  appointed Dr Kolawole as the State Liaison Officer for The State Government at the Federal Capital Territory, Abuja .
In this capacity, he was responsible for co-ordinating the activities of the State Government in FCT and liaised with the Presidency, National Assemblies, Federal Ministries & Parastatals, all Foreign Embassies in Nigeria and Northern State Governments. He left in May, 2003 having valuably and productively served for four years.
also see:

A versatile and highly resourceful personality, Dr Kolawole was the pioneer Head of Department (HOD) of the Department of Economics and Actuarial Sciences of the Crescent University between December 2005 and January 2007.
In consulting capacity, Dr Kolawole was engaged by Ingenieur-Und Tiefbau (I.T.B) Nigeria Ltd in November 2005 to December 2008 as the Administration Manager. In this capacity, he was responsible for the navigation of the organization structure and established the process for universal standard in capacity building, due diligence, market intelligence, corporate restructuring, re-engineering and turn around operations. As the Team Leader, he also had the duty to articulate policy positions on issues relating to people management, project management, strategic thinking and relationship building.
Dr Kolawole was a member of the National Team that drafted and delivered the 30 Year-National Integrated Infrastructure Master Plan (2013 – 2043), where he served as a member of the Monitoring & Evaluation Technical Working Group and The Business Support Group between January 2013 to August 2013.
In February 2014, the Governor of Oyo State, His Excellency Senator Isiaq Abiola Ajimobi  appointed Dr Isiaka Kolawole as the Special Adviser to the Executive Governor on Budget and Economic Planning, and he served in this capacity for two consecutive terms, upon his reappointment in February 2016.
In His capacity as The Special Adviser to the Executive Governor on Budget and Economic Planning, he was the Chief Executive of The State Planning Commission and the Chairman of the State Pre- Treasury Board and Budget Implementation Committee where he Co- ordinated the Budget presentations, Defence and Implementations of all Ministries, Departments and Agencies (MDAs).
He was responsible for seeking new ways to improve efficacy of budget performance through systemic expenditure control to close up fiscal gaps and inefficiencies, monitor the status of budget spending and budget activities by reviewing financial reports and examine budget estimates for completeness, accuracy and conformance with procedures and regulations.
As the Chief Economic Adviser to the State Government, Dr Kolawole was an attendee of the National Economic Council (NEC), the highest Economic decision making body in Nigeria with Vice- President of the Federal Republic of Nigeria as chairman.
Dr Olayinka Kolawole was a member of the State Executive Council (EXCO), the highest decision making authority of the State Government.
On the 13th May, 2020, Dr Isiaka Olayinka Kolawole was appointed by the President and Commander-in-Chief of the Armed Forces of the Federal Republic of Nigeria, President Muhammadu Buhari, as the Deputy Executive Secretary (Services) of the Universal Basic Education Commission (UBEC).
In this Capacity, Dr Kolawole is responsible for the Coordination of Operational activities of UBEC across the South West, South South and North Central Geo Political Zones of the Country. He also directly supervises some Strategic Departments which include Administration and Supply Department, Finance and Account Department, Planning Research and Statistics Department, Special Programs Department and Social Mobilization Department.
In recognition of his sense of probity, forthrightness and astuteness, Dr Olayinka Kolawole was appointed and currently serves as the Chairman, Efficiency Unit of the Universal Basic Education Commission (UBEC), where his duties include Setting the guidelines and benchmarking all The Commission’s expenditures, by looking into the Projects, Programs and Procurement Processes across the various departments and units with a view to harmonizing them, block Loopholes and reduce wastages.
Dr Kolawole also provides liaison between UBEC and National Assembly as he has responsibility to ensure and sustain harmonious relationship between the two institutions.
His Professional core competencies include Monitoring and Evaluation (M&E)
Situation Analysis, Policy Formulation and Economic Transformation, Corporate Re-structuring, Re-engineering, Turn-around Operations, Funds Management, Project Management, Infrastructure Planning, Public Private Partnership (PPP), Human Capital Development, Capacity Building, Leadership, Administration, Strategic Management and Impact Assessment.
Dr Kolawole was conferred with an award of Justice of the Peace (JP) in May 2000 by the then Executive Governor of Oyo State, in recognition of his valuable contributions to the society.
The renowned and well grounded politician,  Dr. Kolawole is currently the Secretary, Oyo State All Progressive Congress (APC)  Elders Advisory Council , with His Excellency, Otunba Adebayo Alao Akala, as the Chairman of the Council.
Dr Isiaka Olayinka Kolawole is happily married with children and his hobbies include reading, travelling, meeting people and table tennis playing. He is passionate about the Nigerian Project and about the unity and oneness of our great country.