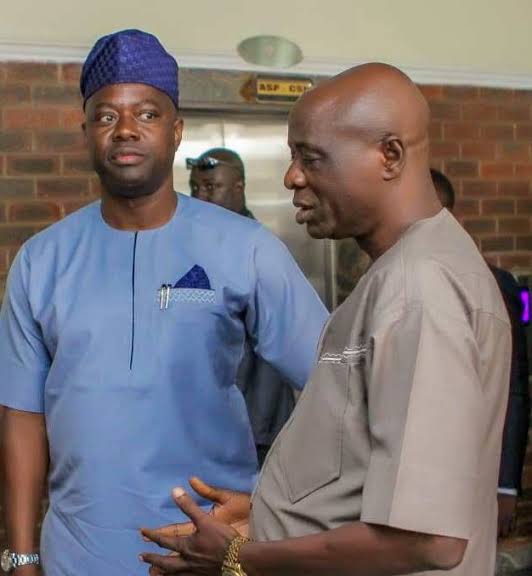 The Oyo State chapter of the Peoples Democratic Party (PDP) has said the governor of the state, Engr. Seyi Makinde usually consult elders under the umbrella of the Elders Advisory Council, led by Senator Hosea Agboola before taking decisions.
PDP in a statement by its publicity secretary, Engr. Akeem Olatunji was apparently reacting to a statement credited to one  Hon. Tunde Salahudeen, who on Tuesday, criticised the setting up of Elders’ Steering Committee of the Oyo State Peoples Democratic Party (PDP) by Governor Seyi Makinde.
The statement also justified setting up of Elders’ Steering Committee by the state governor to reconcile all the aggrieved members of the party in the state.
Salahudeen, in an opinion article he authored and circulated in cyberspace, claimed that the reconciliation committee headed by Dr. Saka Balogun would end up like another Oputa Panel, a mere talk shop.
But PDP said the statement to its members, was an obvious misread of the situation in Oyo State PDP and a complete misrepresentation of the true persona of Governor Seyi Makinde of Oyo State.
The party said; “to start with, the statement by Salahudeen contained a lot of half-truths, which deserve to be placed in the right perspective.
First, he claimed that the most aggrieved member of the PDP is the State Chairman, Alhaji Kunmi Mustapha. He also claimed that there is a “nauseating Omituntun syndrome” in the party; that the chairman, Advisory Council had usurped the office of the State Chairman and that members of the party are suffering in silence.
“These are fallacies being orchestrated by persons who choose to orchestrate half-truths and unfounded postulations.
While it is understandable that in a big house, there must be voices rising from different corners even at odd hours, we implore persons like Salahudeen to ask questions  and get to the roots of issues rather than grandstand on social media or pretend to know, when they are obviously progressing in error.
Let it be placed on record that the setting up of the Elders’ Steering Committee of Oyo PDP was a commendable decision which is aimed at consistently building consensus and ensuring the Elders continue to take their rightful place.
The choice of Dr. Saka Balogun is not only apt, but well deserved because he is a well-regarded elder who says his mind without mincing words.
“Besides, the Chairmanship of the Elders’ Committee cannot at the same time be given to the state Chairman because as the head of the State Working Committee, the Chairman cannot be the judge in a matter that would eventually end on his table.
“It is only good that the Chairman is a member of the Elders’ Committee so that he can provide necessary insights where necessary.
“For the avoidance of any doubt, the Chairman of the PDP in Oyo State is not only at home with the policies of Governor Makinde, he does not bear any grudge against the administration in any way. Indeed, the Chairman was physically present at the inauguration of that Committee.
“One also wonders what is the justification for the claim of the “nauseating Omituntun syndrome” within Oyo PDP.  It is clear that what Salahudeen meant was that the Omituntun structure has dominated other stakeholders in the party and this is not even true.
“Where does Salahudeen get evidence to back that up? While the executive council of Oyo State had 17 members at its inauguration in August 2019, only one of them, Hon. Kehinde Ayoola, the late Commissioner for Environment and Natural Resources, was of the Omituntun ensemble. The rest are either members of the coalition or members of the PDP. So where is the usurpation of positions by the Omituntun?
“It is also instructive to note another fallacy raised by Salahudeen in the write-up. He claimed that the governor unilaterally decides whoever he gives positions. Salahudeen does not qualify to make this statement, as he is neither an elder nor is in any position to know who and who was consulted by the governor before decisions on appointments and other policies are made.
“The governor has an Advisory Council, a huge network of elders and trusted leaders of the party whom he consults on a daily basis. He also has Liaison Officers in the 14 Federal Constituencies, who are led by respected elder, Chief Jacob Adetoro, who incidentally is also a member of the Steering Committee.
Salahudeen’s fears that the Committee, which has not even begun work, would end up like the Oputa Panel, one must say, are baseless. This is a governor, who has shown his penchant for consultation and collective effort at all times. He is renowned for keeping faith with his promises and has made a commitment to ensure that all legitimate concerns within the Party are addressed. If Salahudeen is truly a member of the PDP and he has not been used by some vested interests to destroy the PDP, he should know the channel through which he can ventilate his views.”
also see:

We Lost Over N1billion To Demolition of Our Filling Station