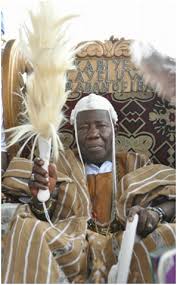 The Olubadan of Ibadanland, Oba Saliu Akanmu Adetunji has commended the Oyo State Council of the Nigeria Union of Journalists (NUJ) on the success recorded during the just concluded year 2021 annual press week.

During the week, the Union had recognised and rewarded eminent Nigerians for distingushing themselves in some fields of human endeavours.

Among those honoured for the Union’s prestigious honours were the State Governor, Engr. Seyi Makinde as Best Media-Friendly Governor in the 45-year-old Pacesetter’s history; former Governor Ibikunle Amosun of Ogun State as the nation’s bridgebuilder and icon of progressives bloc and the Executive Chairman, State University Basic Education Board (SUBEB) in the State, Dr. Nureni Adeniran who was honoured for providing excellent leadership in the field of education.

Others include Senator Fatai Buhari as the Best Media-Friendly Senator of the year; Hon. Akeem Adeyemi as Best Media-Friendly House of Representatives category of the year, while the likes of Kopek Construction Company, Brail construction Limited and Transcend Construction limited were recognised for their roles in national development. The list also included an Assistant Commissioner of Police in charge of Iyaganku Area Command, ACP Sunday Oke; foremost politician, Dr.. Olusola Ayandele (Eruobodo) and the State Commander of Amotekun Corps, Retired Colonel Olayinka Olayanju.

Three Journalists who were rewarded with the Union’s Awards of Excellence were Tommy Adegbite of the Nigerian Tribune, Raji Adebayo of the Daily Independent Newspaper and Banke Adeyemo of the Local Government Information arm of the Union.

Olubadan who was represented by a Mogaji in Ibadanland, Prof. Oluwasegun Adekunle of the University of Ilorin commended the NUJ for staging one of the best events of the year in Ibadan.

Prof. Adekunle tasked the media practictioners to be more alive to their responsibilities of making Nigerian State a better country and pride of African nations.

The Union’s Chairman, Ademola Babalola said the theme of the weeklong events titled: The Media and Country in Crisis, delivered by a celebrated Columnist, Dr. Festus Adedayo was part of the NUJ contribution towards nation building.

He lauded his colleagues for the supports and cooperation to his executive over the last two years, saying the Union would continue to be alive to its responsibility of making Nigerian State a worthy society to live in, for the good of all citizens.