Says Auxiliary is embarrassment to PDP 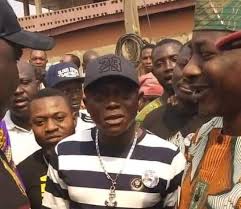 Deputy National Publicity Secretary of the People’s Democratic Party (PDP), Diran Odeyemi and former Secretary to the Oyo State Government, Ayodele Adigun have berated the Chairman, Disciplinary committee of the Oyo State-constituted Park Management System (PMS), Mukaila Lamidi a.k.a Auxiliary over what they described as incessant abuse of office.
It was gathered that one Mrs Adetunbi was harrassed and caned by Lamidi’s boys along Olosan, Alakiya area of Ibadan on Saturday, because they alleged that she was obstructing their way. When her husband, Dr Saheed Adeunbi Ige, came down from the car, Lamidi’s boys were said to be saying:”Omo Seyi lawa, ohun t’aba se, asegbe” meaning (We are Seyi’s (governor)  children, whatever we do, we do and nothing would happen thereafter).
Protesting the harrassment of his wife and that of other passerby, Adetunbi was warned that:”eniyowu te le je, awa o ko yin je, ijoba lo n soro, meaning: (Whoever you are, we do not care, government is talking). In the process, Mrs Adetunbi’s vehicle was badly brushed and damaged. A BMW car which was parked along the road was also pushed into a deep drainage.
The duo of Adigun and Odeyemi, while commenting on a facebook post condemning the act described Lamidi’s attitude as idiotic, saying if the present administration in the state fails to swiftly do something urgent about it would continue portray the government who appointed Lamidi in a very bad light.
Adigun in the facebook comment wrote:”Illiterates must always misuse power. The man is definitely giving government and by extension His Excellency, governor Seyi Makinde a bad image. This is not good enough, like SARS, people are bound to react to the atrocitiers and it is not likely to augur well for the current government”.
Also, Odeyemi in his comment on facebook wrote:”This anticipated overzealousness informed my judgment that Auxiliary as chairman of ‘anything’ is one of the bad mistakes and misapplied decision of “our” government. A correction or reversal will save the government further embarrassment or else, it will cause more damage to the image and cost us some votes. EndAuxiliary”.
The husband of the woman who was harrassed by Lamidi and his boys, Adetunbi Saheed Ige, also wrote on facebook:”To say I am disappointed is to state the least. For the first time, I lost my voice in defence of GSM’s administration, it was a scene not to behold. The government was thoroughly embarrassed. I feel for those that will be nursing the wound sustained at the scene of the ugly incident of last night.
“The government was badly represented, the shout of ‘Awa ni ijoba’ ‘Omo Seyi niwa’ was the height of embarrassment for the incumbent administration in Oyo State.”
also see: