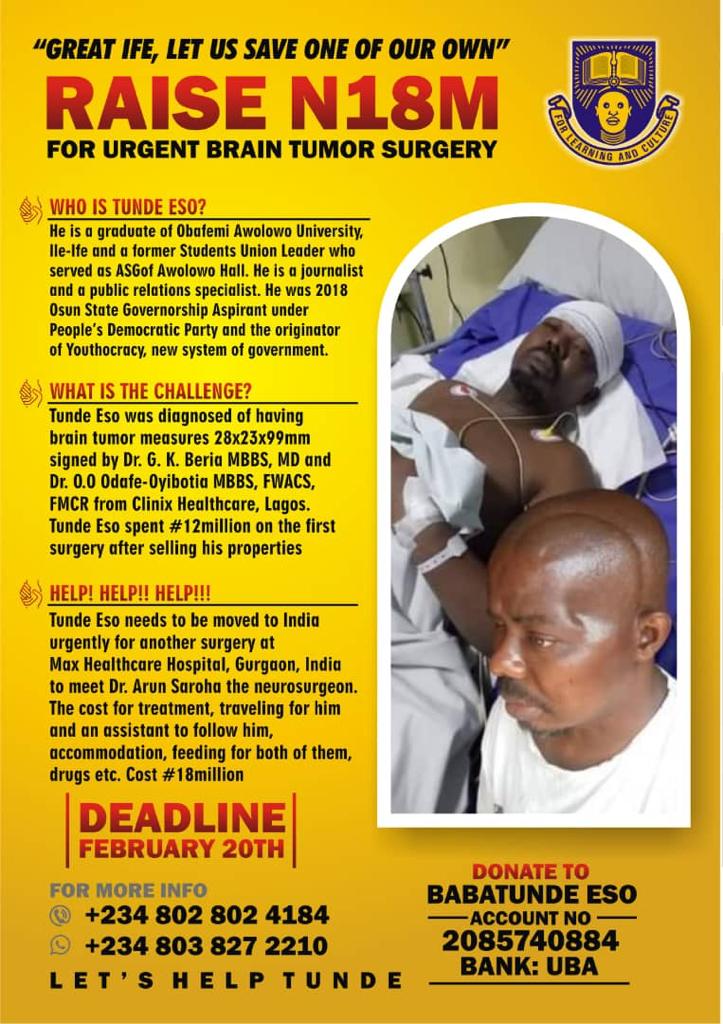 Tunde Eso, an author, journalist and one-time governorship aspirant in Osun State, is losing his life to brain tumor and needs your help to get back on his feet.
When The Guardian visited him in his Jakande Gate residence, a suburb in Lagos State, Eso struggled to open the door. When he finally did, he immediately broke down in tears and it took a while before who could gather himself to narrate his ordeal.
According to him, his problem started when he was given a wrong eyeglass in June 2020. He said the doctor, who prescribed the eyeglass, had diagnosed him of glaucoma, which gave him sleepless nights as the COVID-19 pandemic raged, adding that he lost his left eye on August 13, 2020.
The development made him to visit Crystal Hospital, Egbeda, Lagos, where the neurologist asked him to run a Magnetic Resonance Imaging (MRI) brain scan in July 2020 at Clinix Healthcare, Lagos. Alas, the result of the scan signed by Dr. G.K Beria and Dr. O.O Odafe-Oyibotia revealed that he has brain tumor measuring 28x23x29mm.
The result concluded that “appearances are possibly of left cavernous sinus meningioma.”
Following the result, he was placed on Propolislecithin capsules and other expensive drugs for six months. With the economy on near standstill as a result of the restrictions occasioned by the COVID-19 pandemic, Eso found it extremely difficult to sustain the medications.
In December 2020, Eso was rushed to hospital about three times, resulting in another MRI scan, which revealed that the brain tumor had increased to 71cm. In February 2021, he went for a brain surgery at Marigold Hospital Lagos, but that could not put the sickness behind him.
Eso said: “I was happy after the surgery because of the guarantee from one of the best-rated neurosurgeons in Nigeria, Dr. Omotayo Ojo, who did the brain surgery. But he walked to me a week after at the hospital and told me that there was still tumour but he couldn’t remove it because it was close to my brain. He told me that removing it could lead to my death. He then said that I had to do Radiotherapy at the Lagos University Teaching Hospital (LUTH) Cancer Centre (NLCC). I raised money again and went for the radiotherapy treatment, which started on June 3, 2021.
also see:

“I have sold my house, car, my land and some passionate people have assisted me to overcome this serious health challenge.
I spent over N12 million from 2020 to December 2021 on drugs for my eyes, ears, body system, brain surgery, consultancy, feeding, accommodation and 10 different scans.”
Unfortunately, the tumour has increased again and Eso now experiences pains all over his body. He has been booked for another surgery, this time at Max Hospital, Gurgaon, India, and needs to raise N18 million before February 20, 2022, to enable him embark on the trip. The money covers his hospital bills, accommodation, feeding, drugs and other expenses.
“I am pleading with Nigerians to come to my aid. I want to live to impact the society positively. I don’t want to die now. I am in pain,” he appealed.
Eso is the author of two books, Vision for Africa and African Security Solution. In 2013, he propounded a new system of government, ‘youthocracy’, which he defined as government of the people, by the youth and for the people. He has visited many higher institutions in the country to sensitise the youth to participate in politics and secure their future.
If you are touched by Eso’s ordeals and want him to live, kindly pay your token of assistance to:
Babatunde Eso,
United Bank for Africa (UBA) 2085740884 Naira
2239281003 USD
You can also reach him on 08028024184, 08038272210.