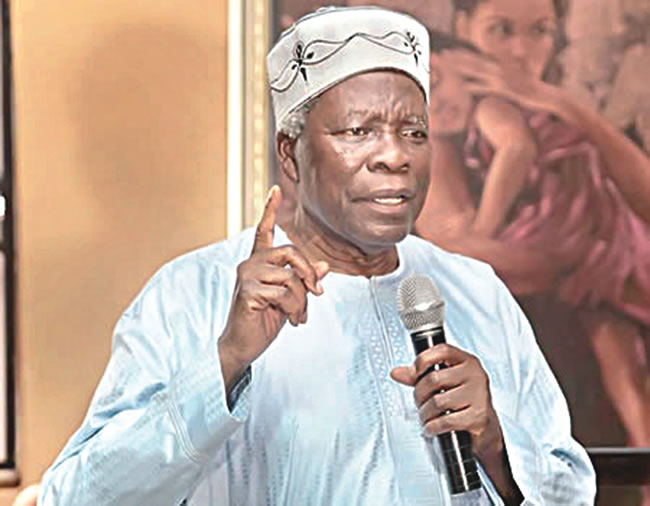 The Yoruba leader, Professor Banji Akintoye on Friday threatened that there won’t be election in Ekiti and Osun states in 2022, if human right abuses continues in Nigeria.
Akintoye said the next election in the region would be for the Yoruba nation, adding “Sunday Adeyemo popularly called Sunday Igboho will soon be blessed with liberation from detention.”
Read the new year message below:
With great gratitude to God, I Banji Akintoye, bring this message to all my Yoruba people at home in the Yoruba homeland and all Yoruba people in the Diaspora in almost all countries of the world. In particular, I congratulate all of us who have in one way or another contributed to the Yoruba struggle for self-determination. I thank and congratulate all Yoruba self-determination organisations and agitators.
In the struggle for Yoruba self-determination, God has granted us a great deal of success towards the attainment of our Yoruba Nation State. Most of our self-determination organizations have grown stronger and more focused and the result is that the Yoruba self-determination struggle has become unassailable. The uninformed may be tempted to see only the divisions between and among our self determination organisations. But the truly perceptive will see that all these apparent divisions are a product of the eagerness of our young people to have a Yoruba country of their own. For our youths, the struggle has started and there is no looking back. Our Yoruba people will do whatever it takes to obtain our Yoruba nation’s sovereignty and our own country in the world.
The positive achievements of the self-determination struggle are visible in very many directions. For instance, one of our organizations, Ilana Omo Oduduwa has achieved a worldwide structure and image and some more of our other organisations are following suit. From the activities of these organizations, great things are happening. In the past few days, Ilana Omo Oduduwa launched a truly revolutionary invention with the name Pajawiri. Pajawiri is already spreading out like wild fire all over Yorubaland. When it is fully spread out and perfected, it will offer protection to every Yoruba man, woman and child at any time in any place. We Yoruba are pre-eminently a nation of intellect. We are a supremely intellectually gifted nation. In the months to come, more assets will be created by our intellect to surprise the world. In addition, one of our affiliate groups, Yoruba Professionals Foundation (YPF), had, in the last one year, trained over 1, 000 Yoruba People on Knowledge-based Enterpreneurship and Smart Agriculture such as Smarts Homes Automation Technology, Solar Technology, Digital Marketing, Accounting Technologies, Cinematography, Drone Piloting, Mobile Application Development, Poultry Management, Data Science, amongst others. The conclusion is that I thank all Yoruba persons at home and abroad who are contributing in big ways and in small ways to the  Yoruba self-determination struggle.
We Yoruba humbly and painfully acknowledge that we have a serious security challenge. Another Nigerian ethnic nationality, the Fulani, have for six years now been busy threatening and trying to seize our Yoruba homeland from us by force. They have come killing our people, destroying our farmers’ farms, villages and farmsteads, raping women and kidnapping people for ransom. They have forced many of our farmers to abandon farming altogether, and they are striving to plunge us into famine and uttermost poverty. They started coming by themselves as cattle herders and militias, armed with sophisticated weapons, but in more recent times, they have been coming increasingly with hired terrorists from the homelands of terrorism in distant parts of the world. The Fulani cannot but know who we the Yoruba people are, and they know that we are the largest, strongest and most educated nationality on the African continent. They know that we are a giant nation that chooses to be humane and gentle. Yet, they have recklessly plunged themselves into this assault on our homeland.
Happily and proudly, we have been responding to their assault, and our responding is getting stronger and more sophisticated. Pajawiri is the latest addition to our mechanisms of response; and bigger and better ones will soon follow. So I congratulate our youths in all parts of Yorubaland for mounting increasingly stronger responses to the Fulani invasion. One thing is certain, we shall not lose even a square inch of our territory to the Fulani Invasion. Meanwhile, in addition, we shall achieve our self-determination and sovereignty, and then we will not have any Fulani threats or attacks to contend with anymore.
also see:

One notable welcome direction in the struggle for self determination and for security has arisen in recent weeks. That direction is the increased potency of our spiritual responses. It is true that we Yoruba are a spiritually powerful nation, and it is true that our intrinsic spiritual power has contributed much to our resistance against invasion. However, in the past few weeks, the spiritual has been seriously accentuated. Only last week, a Yoruba Diaspora group called together all Yoruba people of all religions faiths to launch a spiritual campaign involving the devotees of Yoruba traditional religion, Islam and Christianity.
From all over the world, Yoruba people are responding to this call for prayers and fasting. And from among the millions who are praying and fasting, countless messages of blessing are coming forth for the whole Yoruba nation. First, our dear son, Sunday Adeyemo, will soon be blessed with liberation from detention. Secondly, the Yoruba people will soon be blessed with their Yoruba Nation State, the greatest desire of their hearts. Thirdly, their new Yoruba country will quickly blossom into a marvellous country of peace, love and exceptional prosperity.
The messages also include serious kinds of advice and injunctions for all of us Yoruba people. First, we are seriously advised and warned against cursing. There is too much of cursing going on in our land. One cannot switch on the our social media without hearing terrible curses against persons whom we regard as enemies or traitors. This cursing must stop. It weakens our nation’s spiritual power and makes our nation weak and vulnerable. From our spiritual leaders of all faiths(Muslims, Christians and Isese) the advice is coming that we must stop cursing, and that we must make a habit of praying —including praying for those whom we might regard as enemies or traitors. We must even pray for today’s greatest enemies of our nation namely, the Fulani people. When we pray in these ways, the heavens will open and pour mighty rains of blessing onto our land and into our lives.
From all these, and from other visible indications, I am confident that our Yoruba nation state is close at hand. Therefore, let us embark on thinking of the things we will need to do to make our new Yoruba country the most wonderful place to live in the world. Also, let us embark on thinking of the things we need to do to make our nation a friend and helper to all its neighbours.
Before closing this message, I need to touch on some more issues. The first is that among most Yoruba self determination advocates worldwide, the determination exists and is growing that there shall be no State Governorship and House of Assembly election in our homeland in 2022. The next election that we Yoruba people will engage in will be the first election in our own new country.
The second issue is that the Yoruba self determination struggle will employ the powers of the law more emphatically to resist the abuses of human rights in our Yoruba homeland. Instances have increased dramatically of Human Rights abuses committed against our people. The most serious of such abuses occurred against Chief Sunday Adeyemo and the residents of his home in Ibadan. Others occurred against our people who are carrying out a peaceful rally in Lagos. In Ekiti State, one Yoruba citizen was arrested for no clear reason at the time of the attack on Sunday Adeyemo’s house and he was locked in custody for months. In fact, he could have died in detention. From the beginning of 2022, we are going to take serious actions against all cases of  Human Right abuse against our people. The Yoruba nation must prepare itself now for such Human Rights initiatives.
In conclusion, I am sure that all Yoruba people everywhere are expecting me to make a statement about our dear hero Chief Sunday Adeyemo. How I wish I could announce now that he has been released. Unfortunately, we are not blessed with that wonderful news today. But I join all Yoruba patriots everywhere in the fervent hope that he will soon be released.
I wish all Yoruba people everywhere a peaceful, happy, creative, and productive 2022. May God make 2022 the year of great destiny for the Yoruba nation. In spite of all our challenges, let us enjoy the new year goodies with our families and loved ones.