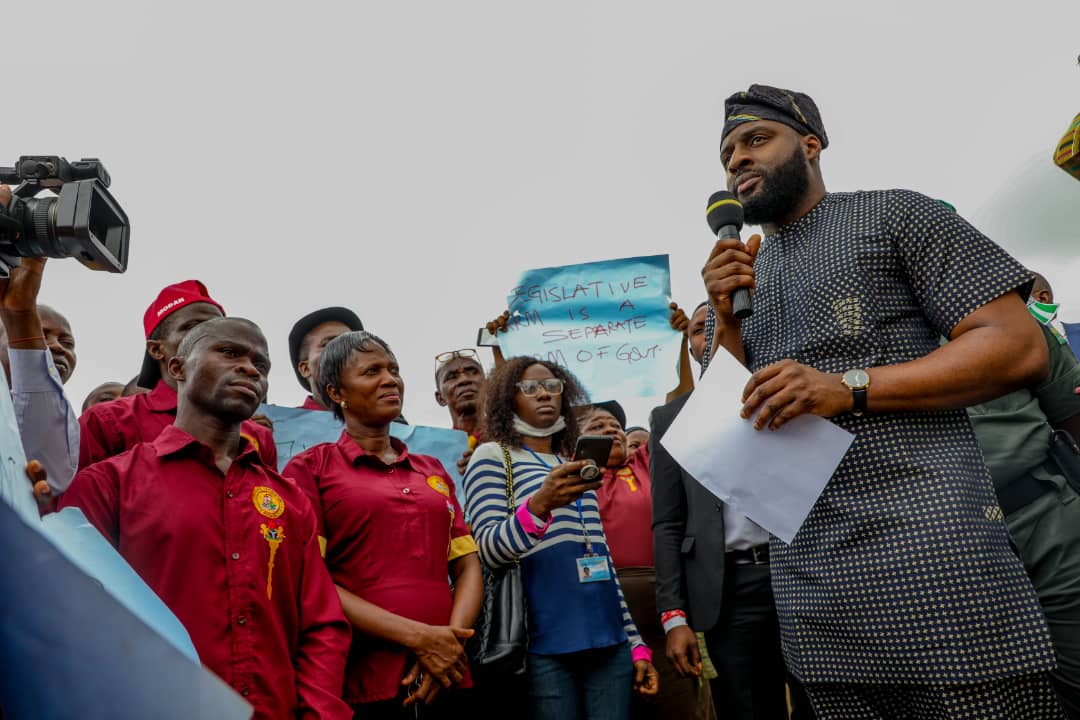 As the Parliamentary Staff Association of Nigeria (PASAN) commenced it’s indefinite strike action across the country, the Speaker, Oyo State House of Assembly, Hon Adebo Ogundoyin on Tuesday assured the workers that their agitation would be achieved.

He commended the legislative workers for their commitment over the years, saying it is their constitutional right.

The Speaker stated this while addressing protesting workers of the Oyo Assembly who gathered at the main Gate of the Parliamentary Building Secretariat, Agodi Ibadan.

The workers shut down all the gates leading to Oyo Assembly complex, displaying placards with different inscriptions.

Ogundoyin stated that the strike would no doubt paralyse the activities of the Oyo State House of Assembly, adding that it was however in the interest of democracy and the independence of the Legislative arms of Government.

He assured them that the Governor’s Forum will soon come up with a uniform modalities of implementing of the financial autonomy.

“No state will be different in terms of renumeration. Everything will be done in a uniform manner. Let me also say that, the Speakers’ Forum too will not relent until the financial autonomy is achieved,” the speaker said.

Earlier, while presenting the Communique from the National body to the Speaker, the Chairman Oyo PASAN , Comrade Yemi Alade said the financial autonomy bill was passed into law in 2018 and assented to with a Presidential Order 10 by President Muhammadu Buhari. We wondered why the implementation has not commenced.

According to Comrade Alade; “if the Legislative arm of Government is not independent and autonomous, true democracy will not be achieved.

” Our appeal is to all the Governors to commence the implementation of the financial autonomy. It is surprising that they are not following the Presidential Order. We will not return to work until our demands are met. ” Oyo Assembly PASAN Chairman insists.