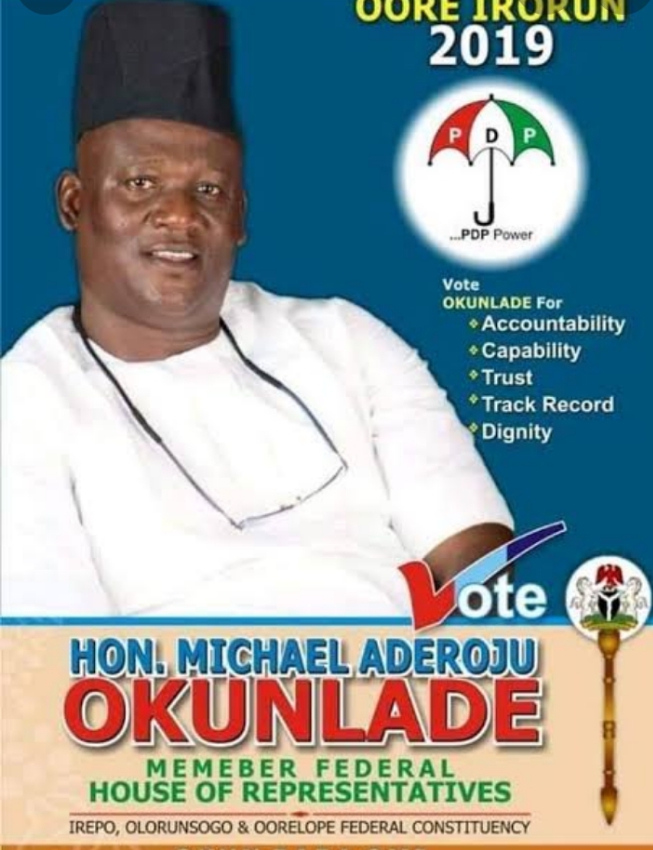 The newly elected Chairman of the Peoples Democratic Party (PDP) in Oyo state, Hon. Michael Okunlade on Saturday promised never to let down the teeming members of the party in the state.
He made the promise in his acceptance speech after his election held at the Jorgor centre, Ibadan.
The former member of the Oyo state House of Assembly who disclosed that  disagreement of the party members with the governor of the state, Engr. Seyi Makimde was for the best interest of the party said PDP would continue to wax stronger and stronger in the state.
According to him, he was one of the victims of the misgivings of governor Makinde.
The former lawmaker said; “Let me start by thanking you leaders, elders and members of our great party. We have made history today. With what we have done today, we have rescued our party from “Mr. Take it all.” We fought for the voiceless among us. We defended our party from oppressors. With this, we have began to rebuild our party. We have started a new down in Oyo state chapter of our party.
“We are all aware why we arrived at this stage. Like you, I am one of the victims of the misgivings of governor Makinde. We struggled for him during the electioneering campaign but we are his arch enemies today. The governor met us in the party but decided to send us away from our home. Will you allow that? Will you allow that? Will you allow that to happen?
“We are here today because you refused to be oppressed. I thank you for your steadfastness and endurance. We thank you for your commitment to PDP and we also thank you for your support.
“On this note, I promise never to let you down. I promise to abide by the Constitution of our great party. I promise to listen and work with you.
also see:

“If you notice anything, please call my attention to it. Don’t hesitate to visit our Secretariat whenever you notice we are derailing.
“My office is open to all members, especially when you have suggestions or recommendations for betterment of our party.
“PDP will continue to wax stronger and stronger in Oyo state, regardless of the shinanigans of those who believe they are in power.
“However, I must say this for prosperity.  When forceful becomes an institution, truth looks like rebellion. We stand nothing to gain to lie against our governor who is a symbol of our party in Oyo state. We stand nothing to gain by destroying what we have laboured for, having being in opposition for eight years.
“During the electionnering campaign, Gov. Seyi promised to be fair to all of us in the state. He promised to continue to correct whatever mistakes he makes while discharging his duty as a governor. He promised safety of lives and property of the people of the state. He promised to dismantle any form of thuggery and hooliganism in the state. He promised us internal democracy. He promised that we won’t regret our support for him. He eloquently stated this all the time and we believed him.
“Today, he has derailed from the promises he made. We feel used, betrayed and dumped by him. Yes, we are aggrieved, not only because lack of government patronage but because our leaders here are matured and seasoned politicians who understand the intrigues of governance. We are also aggrieved because he doesn’t have respect for internal democracy. No respect for our leaders and he keeps blackmaling them, giving erroneous impression of whose they are. He believes that his money brought him to power and that is why everything starts and ends on his table.
“Unfortunately we called his attention to all these realities but he sees us as rebel. We are being blackmailed for saying the truth. He dismantled the structure we built over the years.
“We cannot move around freely now. Even when we were in opposition during Ajimobi’s era, nobody was harassed. There was religious tolerance and we were free to move around. But today, reverse is the case.
“But we believe in God. We know he will stand by us and fight our course.”