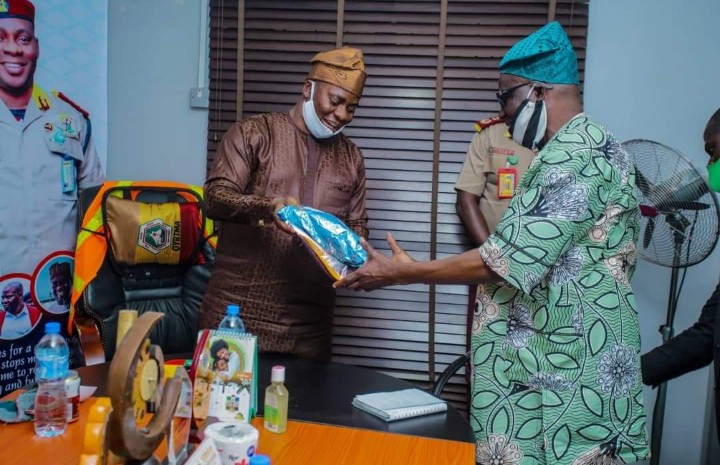 In a conscious effort to end traffic and security challenges across the State, the Director General, Operation Burst, Col. Oladipo Ajibola (Rtd.) has announced an inter-agency collaboration with Oyo State Road Transport Management Authority (OYRTMA) for efficient service delivery in the State.
Ajibola (rtd.) made this known on Thursday when he paid a courtesy visit to the Executive Chairman, OYRTMA, Dr. Akin Fagbemi at the Authority’s administrative headquarters, Secretariat, Ibadan.
According to Col. Oladipo, the decision to collaborate with OYRTMA is a follow up to a meeting held with Dr. Akin Fagbemi few weeks ago, noting that security is a basic ingredient for peace, development and progress in any society.
He stressed that security challenges facing some parts of the State stems from lack of inter-agency collaboration, adding that Operation Burst has decided to collaborate with OYRTMA in getting rid of miscreants.
also see:

He identified areas of collaboration such as an holistic approach to manage and control traffic and traffic-related crimes within the State capital and other parts of the State.
Col Oladipo assured OYRTMA of his maximum cooperation, saying that the inter-agency collaboration would result in more public value than could be produced by either of the government agencies alone.
“I believe with this collaboration, there would be public value than could be offered to the public by just one of us and I am optimistic that this collaboration would make our state crime-free”, he said.
While thanking the DG for the august visit, Dr. Akin Fagbemi called for more synergy between the two agencies particularly in the specific areas of personnel training and enforcement operations.

Folarin Condemns Killing of Barakat, Promises to seek Justice for the Deceased