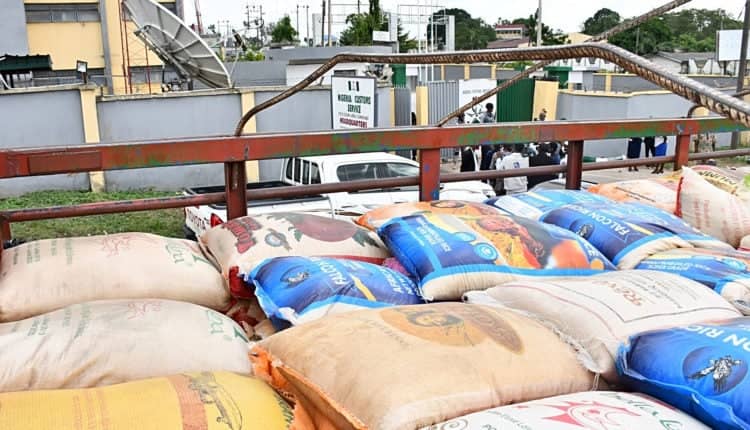 The claims of the state government for rejecting the palliative was that the entire bags was filled with weevils rice.

Oyoecho reports that discussion in major gathering in Ibadan, the state capital was about the rejected rice since the customs refused to accept it back, public are interested in whereabout of the said rice. 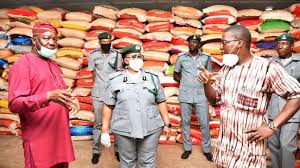 Explaining the Genesis of the crisis, the Public Relations officer of the Oyo/Osun command of the customs, Abdullahi-Lagos Abiola said Ekiti and Osun states also benefited from the palliatives and never complain of such.

Oyo state government had threatened to return the 1,800 bags of rice received from the federal government, saying it was not good for human consumption.

But customs said the officials of the state government selected the rice themselves and were on ground to monitor loading of the rice supplied to the state.

According to the statement, a responsible agency of Government like customs saddled with responsibility of caring for wellbeing of Nigerians cannot turn round and be associated with giving anything that will negatively affect Nigerians.

“In line with the Federal Government’s effort to cushion the hardship in the nation, the CGC had directed the distribution of relief items including bags of rice across the nation through the Ministry of Humanitarian Affairs, Disaster Management as palliative to the vulnerable in the wake of COVID-19 pandemic.

“As instructed, on the 20th of April 2020, the Oyo/Osun Area Command received high ranking members of the Oyo State Government in the persons of the Commissioner for Agriculture and Rural
Development, Mr Jacob Ojekunle; the Permanent Secretary Ministry of Agriculture, Mrs Saidat Bolatumi
Oloko; Executive Adviser to the Governor on Agribusiness, Mr Debo Akande; The representative of Ministry of Humanitarian Affairs and Disaster Management and Social Development in Oyo, Mrs MO Lasisi and other members.

“They visited the command twice on the same day to inspect the bags of rice
that were available for allocation.
The Customs Area Controller, Comptroller, HU Ngozi led them to the warehouses where they inspected
the bags of rice, checked expiration dates and expressed satisfaction and readiness to evacuate their
allocation.

“Before leaving the command on their second visit, they pleaded to be given those from a section of one
of the warehouses they considered “fresher” and this was granted.

“Subsequently, on the 21st of April 2020, the Oyo State Government team came with their vehicles under the supervision of Mr Jacob Ojekunle, Mrs Saidat Oloko, Mrs MO Lasisi and other top officials, in the presence of the Customs Area Controller, other officers and members of the press to witness the loading and exiting of the 1800 bags of parboiled rice allocated to their State as palliative to the vulnerable.

“Incidentally, in the process of loading, few bags fell at different times and burst open in the presence of Mr Ojekunle and Mrs Lasisi and there was no time that any of the burst bags of rice had weevils in them.

“The three (3) states; Oyo, Osun and Ekiti States took delivery of the bags of rice allocated to them, returned their landing certificates to show delivery to its final destinations. They also showed appreciation to the CGC for his magnanimity. Contrary to allegations by Oyo State Government, Osun and Ekiti States have not complained about their allocations.

“The Command is therefore surprised, even embarrassed to hear three (3) days later, that the rice allocated to them were infested with weevils and unfit for human consumption.

“The command wishes to reiterate that weevils do not hide and in the process of loading the vehicles, traces of weevils would have been noticed on the floor, on the bags, on the loaders or on the trucks
bearing in mind that the entire process was in the presence of the CAC, Oyo State Government’s high ranking team and men of the press with full video camera coverage.”

However, the government of Oyo State through Chief Press Secretary to Governor Seyi Makinde, Mr. Taiwo Adisa, who equally serves as a member of the Covid-19 Task Force, indicated that any claims to the contrary was a disservice to humanity and attempt at endangering the lives of the people in the state.

“No government that is worth its name would agree to serve its people with food items that are infested with weevils that are clearly visible to the eyes,” the statement read.
The statement read in full: “On Friday, April 24, members of the Food Security sub-committee of the Oyo State Covid-19 Task Force embarked on an early morning meeting that lasted close to three hours.
“The meeting was to review the report of the technical team that had been conducting tests on the 1,800 bags of 50kg rice presented to the state government by the Nigerian Customs Service (NCS) in respect of Federal Government’s Covid-19 palliatives.
“The Committee eventually invited the Media, after coming to a conclusion that more than a majority of the 1,800 bags were not fit for human consumption as they had been infested with weevils that freely move about on every of the bags kept at the storehouse in the Secretariat, Ibadan.
“The weevils were clearly noticeable as each or the warehouses was opened. Television cameras were allowed to film the bags of rice just to show the clear reason why the bags were being returned.
“A letter that was co-signed by the Commissioner for Agriculture and Rural Development, Commissioner for Special Duties and the Executive Adviser on Agribusiness, was also prepared for onward delivery to the Oyo/Osun Command of the Customs which supplied the rice in the first instance.
“The state government neither intended to dramatize nor politicise the development. It was just out to state the facts as they are: we cannot serve our people expired rice and replace hunger with another disease.
“The Executive Adviser to the governor on Agribusiness, Dr. Debo Akande, who addressed the media clearly stated that if the Customs could muster other bags of rice in good condition, the state would readily receive such.
“But the immediate reaction from Customs, Oyo/Osun Command was a bit comforting as it passed a message to the state government that the bad bags of rice must have been picked from the wrong store. We also got confirmation that Customs was ready to immediately send in 600 bags to replace the bad ones and that representatives of the state were free to immediately come for inspection.
“The state’s team that went for the inspection, however, returned another sad verdict: at least 30 percent of the 600 bags promised as replacement were also infested with weevils.
“To our surprise, statements started flying to town, detailing confusing messages.
“We wish to place on record that the statements credited to the Customs Service were at best a poor colouration of the truth.
“Besides, the opposition All Progressives Congress (APC) in the state, which commented on the matter, was merely dabbling in what it knows nothing about. This is not about politics and political grandstanding.
“The Customs claimed that the Special Adviser on Security, Commissioner of Police Fatai Owoseni (rtd) was part of the team that inspected the rice. That’s a white lie.
“The team that inspected the rice while at the Customs warehouses came from the State Operations Coordinating Unit (SOCU) domiciled in the Ministry of Budget and Planning, while the sub-committee on Food Security principally resides in the Ministry of Agriculture.
“The sub-committee took its time before it came to the unavoidable conclusion that the bags of rice be returned. It has nothing to do with political correctness that some could wrongly ascribe. A state that is trying all it could to secure palliatives for at least 120,000 residents would not readily reject 1,800 bags of rice if the reasons are not compelling.
“We wish to advise the Customs to desist from statements that do not edify the Service, because it would amount to clear betrayal of public trust for an elected government to sanction the release of expired and infested food items to residents of a state.”