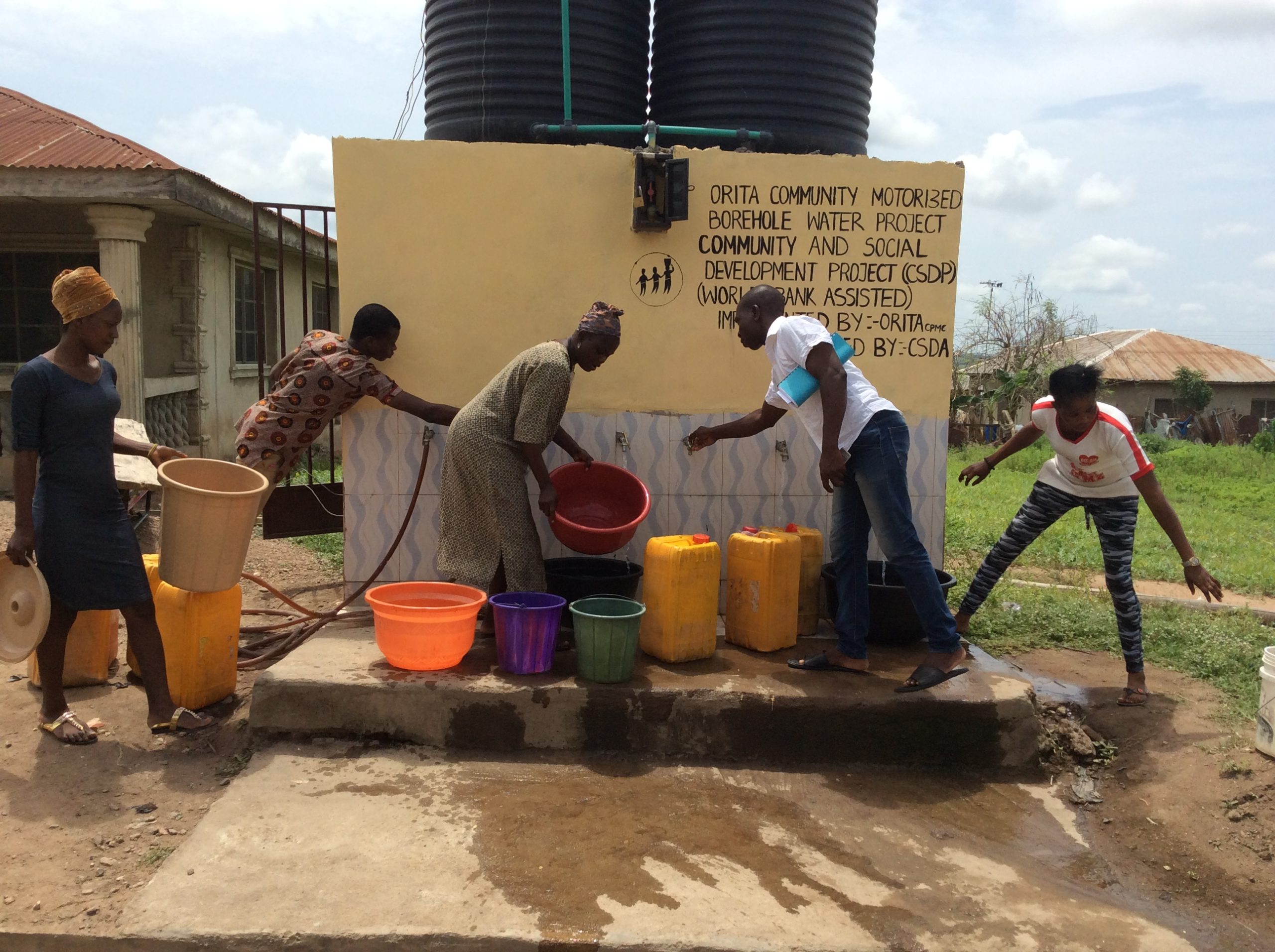 The World Bank and the Oyo state government through its agency,  the Oyo State Community and Social Development Agency (CSDA) have completed another set of projects across Oke-Ogun and Ogbomoso areas of Oyo state.

Other projects completed are: construction of a-3-block of classroom at Community Primary School, Oke-Ayo, Ago Amodu in Saki East Local Government, construction of a-5-block of classrooms at the satelite campus of Oyo State College of Health Science and Technology, Meseole Community, Okeho, in Kajola Local Government area of the state and equipments and furnishing of handicap school hostel in Kajola.

Others are: health center at Tafoo area of Igbeti, in Olorunsogo Local Government, drilling of a motorised borehole and extension of electricity with the use of concrete poles, construction of a two-block of classroom at Community Basic School, Ilaji-Oke in Kajola Local Government of Oyo State and drilling of  borehole for the community.

In Ogbomoso land, among the projects supported by the CSDA are; installation of 500 KVA transformer, drilling of three units boreholes in three different locations, two block of science laboratory at Omobate community high school, Ajaawa, Construction of examination hall at Ibere community High School, drilling of Mono-pump and motorized borehole, and a three block of three classroom at Iroo Community Grammar School, Iro.

Speaking with journalists after the inspection of the completed projects, it’s beneficiaries led by community leaders said the projects were executed by the members of the community, while the CSDA and the World Bank provided financial support to complement the 10percent of the communities.

The Head Mistrees at Community Primary School, Oke-Ayo, Ago Amodu in Saki East Local Government, Mrs Olaoye Olufemi Adeolu said she used to sit under the tree because of non availability of classrooms, before the intervention of CSDA.

According to her, ‘When i was transfered to this school, there was no office for me to use. I used to sit under the tree as a result of non availability of office, but with the intervention of this project, I have office for myself, “she said.

A student of the school, Adisa Joel, said the building will help the students to perform better bacause it is very conducive for learning.

A member of the community, Mr Ayoade Muyideen Adeyemi noted that everybody was exited to recieved the project, because it has brought alot of changes in the lifes of the people living in the community.

“Our childreen used to learn under the tree in front of their school but now, they have conducive classrooms for themselves. Also, the borehole is also useful, because our people now have access to pure water and this will increase the health status of our people.”

The CPMC chairman at the satelite campus of Oyo State College of Health Science and Technology, Meseole Community, Okeho, in Kajola Local Government area of the state, Mr Olalekan Gibeon Adesola while narrating his experience said over nine million Naira was set aside for the execusion of the projects, adding that it was a priviledge for the town to have had a higher institution of learning.

“It has been a while we have been clamouring for higher institution in this town.  Now that a satelite campus has been giving to us, we were using a class in a private school as temporary site for the school, we are very happy to have a permanent site for the school,” he said.

A 200 level student of the school, Ali Olamide in her response said the new building will make the environment more civilised and conducive for the students.
“Sharing the same environment with secondary school makes it inconducive for us to learn, with this new building, it will enable students unionism,” she noted.

In Tafoo Community area, Igbeti, in Olorunsogo Local Government where health center was built, a motorised borehole was dugged, and extention of their electricity with the use of concrete poles, the CPMC chairman of the area, Alh Musbaudeen Ibrahim, pointed out that the new contructed health center has solved their fear of health related  issues noting that before the intervention,  people travelled  three to four kilometers to recieved healthcare services.

“We used to travel far for our healthcare services before the intervention, so we now decided to rent a single room apartment nearby so that people can have access to healthcare delivery without going far away again, but since this health center has been built, we now have access to adequate healthcare.”

A nursing mother, while speaking with newsmen said that people of the community use to travelled to the town before the can take care of themselves, when ever they feel sick, adding that access to new health center has reduced their cost of transportation and stress.

“The health center, the boreholes, and the electricity extention has brought a good change in this community because people are now feeling the impact of the government.”

She emphaised that the birth rate in the community has also increase, noting that everybody now have access to healthcare facilities without  any stress.

Community Basic School, Ilaji-Oke in Kajola Local Government of Oyo State was not left out in the intervention project where two blocks of classrooms with Administrative office, was built for the students and a borehole was dugged for the community so that people in the community can have access to good water and good education.

Mr Azeez Rasak, who was the CPMC chairman in the area while talking to journalists said that the school was just like a desert before the intervention project, adding that students used to lap themselves because the space of their former class was very small.

Mrs Mulikat Yusuf who is the Assistant Head Mistrees (HM) of the school said that with the intervention project, the number of students enrollment in the school has increased from 75 students to 200 students, noting that this has also improved the performance of the students.

In Ogbomoso land where numbers of projects were executed,  the chairman CPMC in the community, Olajide Funsho John who spoke on behalf of the community commended the world bank, Oyo state government and the State Community and Social Development Agency for their prompt intervention in providing drinkable water for the community.

Olajide said;” Our politicians are wicked. They neglected us in Ogbomosho land. We requested for water project here but they turn us down. In fact, one of them who lives very close to this community told us that he didn’t know that we don’t have light in this community. But we thank God that CSDA and the world bank came to our rescue.”

An octogenarian who doubled as a former chairman of the landlord association, Rev. Nathaniel Ajayi who described the experience of the residents in the past as “pathetic “said the intervention of the CSDA and the world bank as timely.

He said before the intervention, women find it difficult to get drinkable water. “Our experience in the past was terrible. As you can see, I am an old man. I know all the story of this community and I can tell you it was not easy for us. We thank the state government, CSDA and the world bank.”

Another resident, Adebayo Oyewunmi in his own contributions faulted politicians who are representing the community at the state and National Assemblies for neglecting the community. ” I think the challenges we are having has to do with the poor performance of those representing us at the National Assembly and state Assembly. Many of them have boreholes in their houses and they cannot allow us to fetch,” he said.