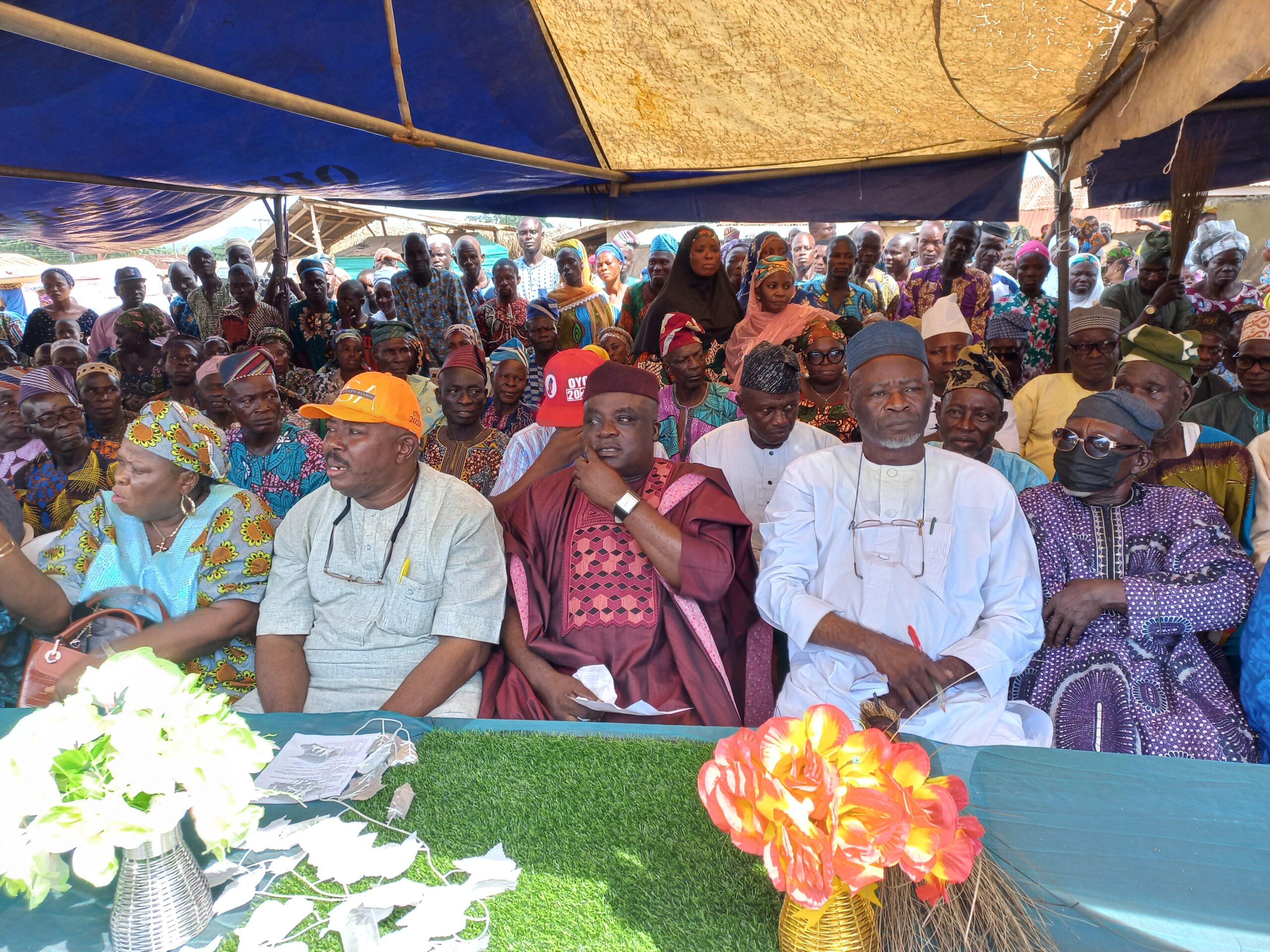 The Oyo State Chairman of the All Progressives Congress (APC), Hon. Isaac Omodewu, the Oyo South Senatorial candidate of the party, Akogun Sarafadeen Alli and other leaders of the party in the State on Saturday received a member of House of Representatives, representing Ibarapa Central/Ibarapa North Federal constituency, Hon. Muraina Ajibola and over 18,000 members of the Peoples Democratic Party (PDP) to the APC.
At the meeting are; the vice chairman of the party in the state, Alhaji Olaide Abas, the former Secretary of the party, Hon. Mojeed Olaoya and other party leaders in Ibarapaland.
A member of House of Representatives who led the defectees to APC, Hon Muraina Ajibola said he has the records of about 18,000 who followed him to the party, begging APC members never to leave the party for those who are coming to join them.
Speaking at the event which was held in Igangan, Ibarapa North, the chairman of the party in the state, Hon. Isaac Omodewu said as a leader of the party in te state, he has been appealing to aggrieved members of the party and his appeal has been yielding result.
He welcomed the defected PDP members, saying they will would work together to defeat PDP led government in the state.
also see:

“We are here to ensure that we unite our people. This mammoth crowd are defecting to our party from PDP today. We have been appealing to them to stay in their home. They dont have anything to do outside the party when we are working hard to return to Agodi government house in 2023.
“For those contemplating of going to other party, no place like home. Let them stay in their house. As the chairman of the party in the state, I will continue to appeal to them to stay in the party. If you see whatnis going in here today, you will see the need to unify our people. Our chances in 2023 election is very bright and that is why our primaries was very tense.”
In his own contributions, the Oyo South Senatorial district candidate of the party, Akogun Sarafadeen Alli said he has been visiting the aggrieved members of the party and was confident that they will all work together in 2023 elections.
“We are making efforts to make sure that we bring those aggrieved back to the party. You can read in the news that I visited some of those who contested against me at the primaries.  Two others are outside the country and as soon as they return, we shall resolve all this issues.
“The beauty of it is that they have not left our party but we shall find a lasting solution to whatever grievances they may have. I am not the only one who is qualified to represent our senatorial district. All of us are qualified at one point in time, God only put one person there and he had said at this time, it is my turn. You will agree with me that reconciliation is a process and ongoing thing. I can assure you that before next year elections, all of us will be in one party.”
Also speaking, a member of House of Representatives who led the defectees to APC, Hon Muraina Ajibola said he has the records of about 18,000 who followed him to the party, begging APC members never to leave the party for those who are coming to join them.

How We Returned Peace To Igangan – Hon. Muraina Ajibola