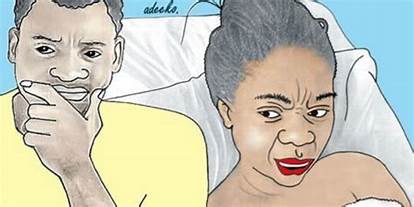 A clerical officer, Mrs Rachael Alabi has told a Customary Court sitting at Mapo in Ibadan to dissolve her nine year-old marriage to husband, Pastor Segun Alabi because he was allegedly making desperate effort to use her for ritual.

Rachaelmade the submission before Chief Ademola Odunade, the court’s President that her life was under serious threat due to her husband’s desperation to acquire spiritual power to perform miracles.

She added that she barely survived the last ritual attempt her husband had on her after he had used voodoo on her.

“I never knew that Pastor Segun combined fetish doctoring with evangelism, or else, I would have stayed away from him.

“As soon as I got into his house as a wife, I noticed that I started growing sleamer and losing blood to the extent that my bones became so visible to any onlooker.

“All Segun kept telling me was that I possessed demonic spirit of which I knew he was lying.

“One day, I stumbled across a booklet containing various voodoo or charms and their supporting spells or incantations and I saw the particular one he attached to my name.

“However, I was not quick enough to keep the book because Segun returned home while I was deciding what to do.

“I recall that he also prepared a gory site of voodoo at a corner of the house,” she said.

Rachael further said that her husband has refused to take any form of responsibility on the only child between them.

In his counter argument, Segun objected the suit and denied his wife’s insinuation that he was a ritualist.

He contended that the only reason why he doesn’t want the marriage to be dissolved is because it was a court wedding, adding that both of them were originally not compatible by genotype as they are both AS.

“I did everything I could to take care of Rachael when she fell ill, but her relatives wouldn’t appreciate my effort.

“I wanted to play my fatherly role on the child, but, I couldn’t locate Rachael since she left my home.

“In fact, I have reported her at the welfare department before,” Segun said.

He tendered the wedding certificate conducted at a registery in Ibadan.

In his ruling, Odunade dismissed the suit, citing lack of jurisdiction on the matter.

He however, advised the plaintiff to approach the state high court that can entertain the suit or seek further advice from her lawyer.