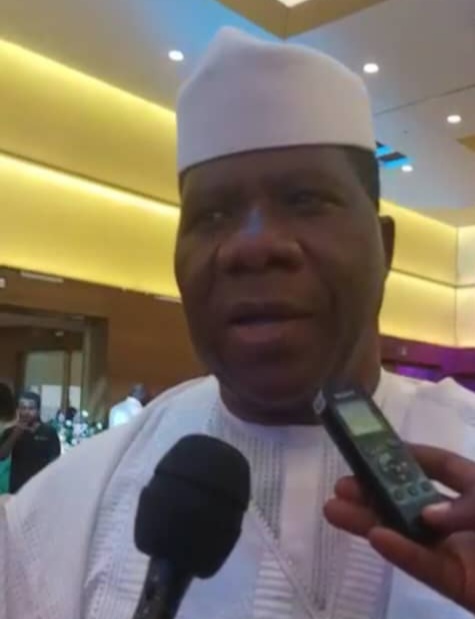 By Ikeoye Oyetoro
The rich and influential people in our society have been strongly advised to always give back to the Society by helping the poor and the less privileged for the betterment of the country.
This was disclosed by Senator representing Ekiti Central senatorial district, Senator Michael Opeyemi Bamidele (MOB), during the Official launch of a new foundation called Alice Ajisafe Foundation(AAF) which took place at Eko Hotel, Lagos State on Saturday.
Senator Bamidele who donated N25million in support of the launched foundation also rewarded all the awardees handsomely for their commitment to personal  development.
The foundation whose motive is to support Children education and Women of all ages was founded by the CEO/MD, Post Assurance Brokers Ltd, Mr Iekan Ajisafe in marking the 10th years Anniversary of his late mother, Madam Alice Ajisafe who throughout her lifetime believed in helping and raising the less privileged to achieve their purpose in life.
Senator Bamidele while addressing the Press said” If the rich always help and hangout with their fellow  rich people and neglect the poor and common man, the army of the less privileged, angry, dissapointed,frustrated and hopeless youths will continue to grow bigger and everyone including the rich will pay dearly for it at the end of the day.
He noted that he is always interested in any good cause that has to do with helping the less privileged saying it is an avenue to give back to the society and bring hope of better future to the hopeless .
The Founder of the newly launched foundation, Mr Lekan Ajisafe while addressing the press disclosed that the family set up the new foundation in the memory of their late mother so as to sustain her legacy of always giving out to the poor and helping women especially to have a befitting life that will make it easier for them to play the role of a teacher and manager in the lives of their Children.
also see:

Also, the Special Adviser to Lagos State Governor on Administration, Mrs Titi Oshodi emphasised on the need to appreciate women and ensure that they should be cared for at all times saying the role of a woman in economic and social development of our nation cannot be overemphasised.
The Guest Speaker of the event, Vice Chancellor, University of Lagos, Prof. Oluwatoyin Ogundipe during his keynote address admonished Men to always Men to always empower their Women and take proper care of their homes stressing that it is the major responsibility of a man to take care of home by making necessary provisions for the family and also ensure they give sound education to their Children so that they can become relevant in the society.
The Senior Special Assistant (SSA) to Lagos State Governor on Sustainable Development Goals (SDGs) Mr Lekan Fatodu while giving his welcome address appreciates the guests for turning up in large numbers for the launch of Alice Ajisafe Foundation and admonished people to support the foundation in anyway they can so that the good intentions of the foundation towards the less privileged can continue.
The new foundation made a Cash donation to 3 beneficiaries namely:
Mr. Ibrahim Masoyi Bitrus, a gateman who was sponsored by Mr Ajisafe to tertiary institutions was given a sum of Two Hundred and FiftyThousand Naira (#250,000) plus additional Two Hundred and Fifty Thousand Naira (#250,000) from Senator Michael Opeyemi Bamidele making a total sum of Five Hundred Thousand (#500,000) that he received
Mrs Onokpite Agbaduta Beauty, a 59years old Grandma Interstate driver also received a cash gift of Two Hundred and Fifty Thousand Naira (#250,000) from the foundation plus additional Two Hundred and Fifty Thousand Naira (#250,000 )from Senator Bamidele plus additional Hundred Thousand Naira (#100, 000 ) from a kindhearted Person that appreciates her effort as an Interstate driver making a total sum of Six Hundred Thousand Naira (#600,000) that she received
Modupe Cole Memorial Child Care and Treatment Home ( Child Care Social Services – Women Voluntary Organisation) also received a whooping sum of One million naira(#1,000,000) from the foundation and an additional Two Hundred and Fifty Thousand Naira (#250,000) from Senator Bamidele
The Senator also promised to be assisting the newly foundation with cash donations of 5 million naira every year for the next 5 years saying it will be his greatest joy to see the meaningful impacts that the foundation will have in the lives of the common man.
Mr Ajisafe in his Vote of Thanks thereafter appreciates all his friends, home and abroad, political associates, Lagos State Government and meaningful Nigerians that came to grace the event for their support towards the success of the launching of the foundation and pray that God will continue to bless them and bless our Country.
He gave his assurance that the foundation will not relent in making meaningful impacts in the lives of Women and Children.